Patience Wearing Thin as Unrest Continues at Agung but No Eruption 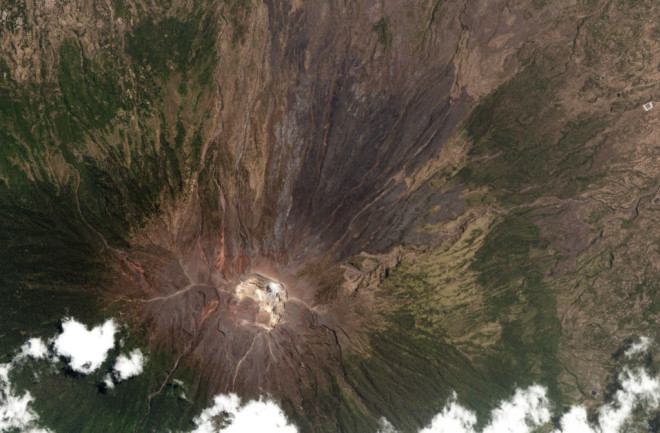 A view of the crater at Agung on September 27, 2017. The increased steam and gas emissions can be seen on the right side of the crater. The dark scar on the slopes of the volcano come from a forest fire earlier in the month. Image by Planet Labs. We have likely entered the most dangerous period in the waiting game at Agung in Indonesia. It has been over 2 weeks since the volcano began to show signs of unrest and it has done very little other than shake and produce a small steam-and-gas plume. Upwards of 140,000 people have evacuated from the regions near the volcano and now all of them are watching and waiting for the volcano to do ... something. The longer the wait, the more likely people may reject the assessment of volcanologists that an eruption is going to happen and try to move back to the homes near the volcano, potentially lining us up for a larger disaster. So, what can be done? The signs of this impatience are already there: officials on Bali want tourist warnings rescinded as thousands of trips to the region have been cancelled (possibly leading to as much as a 30% decrease in tourism). Many people who live far out from the volcano who evacuated anyway have been asked to return to alleviate pressure on aid/housing for evacuees, yet they stay away out of fear. Even the media is beginning to ask questions about why the volcano hasn't erupted and what happens if it doesn't. For a volcanologist, there is no easy answer. Much like meteorologists who get grief if you only get 2" of snow instead of 20", volcanologists must contend with residents who seem upset that they used an abundance of caution rather than put people in greater risk. However, once that trust is eroded, it is hard to rebuild. During the 1980's, the USGS was very concerned that Mammoth Mountain in California was heading towards an eruption and took to the media to relay that potential threat. This severely impacted the people living in the tourist-heavy area, especially in terms of real estate prices and visits to the ski areas on the volcano. However, nothing came of the earthquake swarm at Mammoth, so the local residents claimed that the USGS oversold the threat. As they say, hindsight is 20/20. During a crisis, you are presented with information and need to make the best interpretation possible that could prevent the most loss of life. You might be lulled into a sense of complacency if you sit through the period of unrest and see nothing change for days to weeks. Yet, if you were dropped into that situation in Day 10 of the crisis without any background, you would know the situation is highly hazardous.

The number of earthquakes at Agung has not really changed since the earthquakes began (see above) ... and that isn't a good thing. It means there is still a high level of unrest, so the threat remains. However, the perception might be that little has changed in the number of earthquakes, meaning that the threat has diminished. It has not. Instead, the longer the heightened unrest persist, even if it doesn't increase, the greater the likelihood that an eruption could occur. This doesn't say anything about the size of that eruption, but all that potential is still there. Luckily, preparations are still underway to help with evacuations when an eruption happens. Ferries are being prepared

to get tourists out of Bali if any eruption closes airports (author's note: what about locals?) The PVMBG has deployed new webicorders

to monitor the changing seismicity at Agung and there are webcams that are pointed at the volcano.

A small steam-and-gas plume from Aoba on Ambae in Vanuatu, seen on September 29, 2017. Although the eruption plume was small, the dark grey ash on the landscape betrays larger eruptions earlier in the week. Image by Planet Labs. Meanwhile, in Vanuatu, the entirety of the population of Ambae have been asked to evacuate

due to the increasingly large eruptions

. This is a massive operation

involving all manner of transport, but luckily almost all of the island's over 11,000 inhabitants

have been moved. The government of Vanuatu has promised that people will be able to return

when the threat diminishes, but no one has an idea of when that might be. Satellite images of the island show how much ash has impacted the idea, where great swaths of green have been turned grey due to the eruptions (see above). An evacuation this large in a nation like Vanuatu means that many people have been put into a dire situation

, so calls for aid

have been made -- some of which have been heard by neighboring nations.

Both of these volcanic crises share traits: large populations of at-risk people need to be moved from the vicinity of the volcano. In one place, the threat is clear as eruptions coat the area with ash. In the other, unrest continues but patience is wearing thin as the volcano has not produced an eruption. You might think the latter is a better place to be, but as that patience disappears, we may see a larger crisis loom as people try to head back into areas where the volcano threat still remains.