Parker Solar Probe Will Zoom By the Sun Again Today 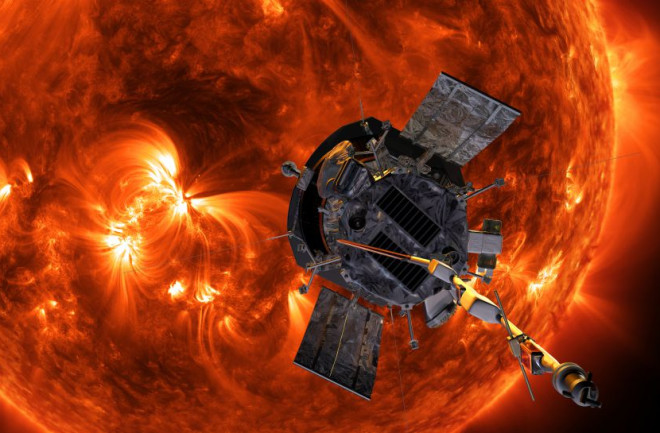 The Parker Solar Probe is on its second close approach of the sun, zooming to within 15 million miles. (Credit: Steve Gribben/NASA/JH-APL)

The Parker Solar Probe is zipping through the sun's outermost layers today at 213,000 miles per hour, enduring sizzling temperatures that would fry most other spacecraft. The probe will come within 15 million miles of the sun, reaching perihelion, its closest point, at 6:40pm EDT. But it’s so close even now that it hasn’t been able to send back data to Earth since March 30. The probe must keep its protective gear pointed straight toward the sun, leaving no wiggle room to point an antenna back toward Earth.

The probe has flown this close once before, so it’s tying its own record on this approach. The previous record holder was the Helios 2 mission at 27 million miles, or nearly twice the distance. But by the end of its mission in 2025, the Parker Solar Probe will end up grazing the sun itself, only 3.83 million miles from its surface, within the sun's outer corona layer.

Despite the sun being the closest star, and one that is under nearly constant observation, there are still many open questions about how the sun works. Scientists don’t understand how the solar wind accelerates particles the way it does, or why the sun’s corona is so much hotter than its surface despite being further away. By flying through the corona at temperatures nearing 2500 degrees F, researchers hope the Parker Solar Probe can offer answers to some of these questions.

A picture of our Sun's upper layers taken by Japan's Hinode spacecraft in 2007. (Credit: JAXA/NASA)

Flying into these extreme conditions is a challenge for the probe’s hardware, which must be hardened against both extreme heat and radiation. But it’s also a challenge just to fly so close to the sun and its hefty gravity. Launching the spacecraft toward the sun is akin to hurling a ball down a steep hill, and engineers had to check its speed somehow.

So they designed a new kind of flight path for the solar probe that uses the planet Venus as a braking maneuver. Usually, engineers use loops around the planets as a kind of slingshot to speed spacecraft up. But this time, engineers are steering the probe closer to Venus to slow it down. This will also tighten the probe’s orbit to loop it closer to the sun. In the end, it will use seven Venus gravity assists to accomplish 24 passes of the sun, each one closer than before.

The Parker Solar Probe’s current encounter will last until April 10. It will take much of the spring to transmit all its data back to Earth so that astronomers can begin unraveling the sun’s secrets with help from its nearest visitor.