Pacific Rim Physics (Part 2): In a Nuclear Explosion Bubble at the Bottom of the Ocean 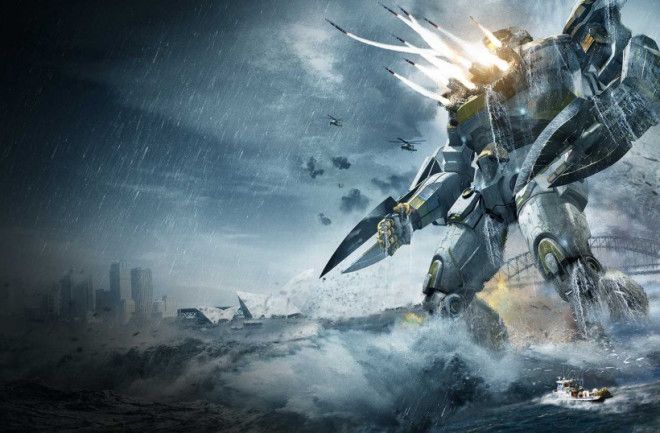 Pacific Rim probably had a checklist. Giant robots with giant swords, guns, and rocket arms? Check. Giant monsters with giant claws, teeth, and acid spit? Check. And if all that rock ‘em, sock ‘em goodness wasn’t enough, the movie concluded with two massive nuclear explosions. One was so big that it literally turned a part of the ocean bottom into dry land before caving in on itself. Having a robot with future-strength muscles is something we can forgive to keep the movie rolling (it would take something like 1,000 Bugatti Veyron motors just to lift a jaeger arm), but nuclear blasts are something we know a lot about. Since the 1950s we have gone atomic with the equivalent of 500 million tons of TNT to figure out just what happens.

It begs the nerdy question: How big would a jaeger bomb have to be to create dry land on the bottom of the Pacific Ocean?

Late in the film, the jaeger Striker Eureka sacrifices itself to destroy two circling kaijus. Its payload was meant to destroy the inter-dimensional portal that kept the kaijus coming, but that would be left up to the jaeger Gipsy Danger and its nuclear rector. Striker detonates, creating an enormous bubble of steam and energy that rushes past the other jaeger and reveals a dry sea floor complete with flapping fish. A second later water rushes back in to fill the void and Gipsy Danger limps to its final destination.

When a nuclear bomb explodes underwater, it does in fact create an enormous bubble that first rushes out and then collapses and expands in a series of struggles with the surrounding water pressure. The physics behind it is complicated and fascinating [PDF]. Importantly, we have done enough nuclear testing to come up with equations that model how big a bomb bubble would be. But to find the size of the bubble we need the size of the bomb.

Early in Pacific Rim the plan to stop the kaiju invasion is revealed: Bomb the “breach” and destroy the inter-dimensional portal. To do this, the jaeger Striker Eureka is outfitted with a 2,400-pound thermonuclear device—equivalent to 1.2 million tons of TNT. That sounds impressive, but it is quite small in the annals of blowing up huge bombs. The largest nuclear device ever detonated—Tsar Bomba—was 50 times larger. Even so, the jaeger bomb isn’t anything to mess with. The energy it carried was about how much a large hurricane expends in any one second.

Size isn’t everything; depth matters too. Nuclear explosions have very different behavior depending if they are near the surface or deep in the sea. In fact, if you place a nuclear bomb deep enough, there will hardly be anything happening at the surface after it explodes. Maybe an upward rush of water, but no mushroom cloud. Conversely, if the bomb is only a few hundred feet under the water the resulting plume is absolutely incredible. So to find out what we’re dealing with in Pacific Rim we have to estimate the depth.

In the final scene of Pacific Rim, the pair of jaegers descends into the ocean to blow the breach. Because there was no light where the jaegers were treading (you could even see hydrothermal vents) and the average depth of the Pacific Ocean is around 4,000 meters, we could estimate that the bomb went off far below the ocean somewhere in the region dubbed The Abyss. The deeper the blast, the more pressure the explosion has to fight in order to create a large bubble.

Pacific Rim Physics (Part 1): A Rocket Punch is a Boeing 747 to the Face

In 1971, the military generated a report that used both depth and explosive yield (the energy of the bomb) to model how big the underwater bubble would be after a nuclear explosion. (The incredible webcomic XKCD used this equation to estimate a nuclear blast at the bottom of the Mariana Trench.) The equation used bubble geometry, water pressure, and explosive yield to spit out a maximum radius for the blast bubble (pg. 34 if you are so inclined). Putting everything we could glean from Pacific Rim together, the jaeger bomb would create a bubble as wide as the Hindenburg—about 245 meters.

In the first second, the bubble doubles in size and is subsequently crushed back down by the enormous water pressure. It goes through this cycle of compression and expansion three times before either making it to the surface or dissipating completely into a rising swell of hot, radioactive water. (You can see the same process of "bubble bounce" on the small scale by firing a gun underwater.) If the bubble did eventually make it to the surface, it would look something like this, with water exploding from the deep at over 200 miles per hour.

But what about the movie scene? Seeing that the bubble would be almost three football fields across, there would be some few milliseconds where all the water inside would be vaporized, leaving only “dry” ground. It would be like the eye of a nuclear storm as the shockwave propagated outwards to flatten what little sea life lives there.

However, there are a few caveats to this confirmation. First, considering that submarines—huge machines comparable in size to jaegers—can be nowhere near an underwater nuclear explosion without being damaged (just look at all that redacted information!), it’s doubtful that Gipsy Danger could either hold itself through the shockwave or emerge from it intact. Second, the heat inside the primary explosion bubble would be hot enough to completely vaporize both the kaiju and the jaegers. If Gipsy Danger can burn through the category 5 kaiju Slattern with the exhaust from its nuclear reactor, the heat from the nuclear explosion would melt both of them. A nuclear blast on dry ground melts rock. Lastly, an enormous crater hundreds of meters wide would be formed by such a blast. If Gipsy Danger wasn’t outright destroyed, it would have a serious hole to climb back out of.

Forgiving these problems, it’s conceivable that a jaeger strong enough to withstand the blast could be in a waterless pocket at the bottom of the Pacific Ocean—at least for a second or two, because physics.