Pacific Rim Physics (Part 1): A Rocket Punch is a Boeing 747 to the Face

What better way to “cancel the apocalypse” than to use rockets to accelerate a million and a half pounds of steel squarely into an inter-dimensional monster’s face?

Pacific Rim—a science fiction love letter to the giant monster movies of old—came out swinging two weekends ago amid the squees of geeks everywhere (though no squees were heard at the box office). Its story was a rather simple fanboy or girl fairy tale—giant robots fight giant monsters—and the action was kaiju-crushingly intense. In fact, if you were like me, you might have even fist-bumped the screen when you saw a Anime-style rocket fist deliver a mountain of metal to a snarling kaiju’s face. It was so cool that we are required to science it.

Just how much power does to take to make a kaiju crumble? Keep cheering, because that particular punch was like taking a Boeing 747 to the face.

Like how we describe car crashes and TNT explosions, Joules—a measure of energy—are the best units to use when calculating what an elbow rocket can deliver. More specifically, we want the kinetic energy (measured in Joules) of the punch in order to make comparisons. All we need is the mass of the jaeger arm and the velocity of the punch.

The first thing we know is that jaegers are huge; like 100 feet taller than the Statue of Liberty huge. And with great height comes great weight. The main robot of Pacific Rim, Gipsy Danger, is said to be 7,080 tons*—half the weight of all the trash produced in New York City in one day. Based on this weight and some other assumptions about how much an average human arm weighs in comparisons to full body weight—other nerdy engineers like myself have estimated the jaeger rocket arm to be about 1.5 million pounds.

Despite their enormous mechanical power, jaegers aren’t that fast. Part of this is for cinematic effect—slower than normal motion gives the illusion of weight to the robots. But their speed is also fairly average because the robots’ motion is based on human pilots who physically move them around. The average person can’t punch very fast—maybe 15 to 30 miles per hour—so it’s understandable that you might put huge rockets on your robot to help KO a kaiju.

Read More: Pacific Rim Physics (Part 2): In a Nuclear Explosion Bubble at the Bottom of the Ocean

At full burn in the clip, the jaeger Gipsy Danger’s fist hits the kaiju’s face not much faster than an average human punch, but velocity matters. If going 50% faster than a good human punch at the time of impact, the 1.5 million pound arm would be carrying 125,000,000 Joules of kinetic energy. Being on the receiving end of a jaeger rocket punch would then be like getting hit in the face with a Boeing 747 going 60 miles per hour—the same as typical runway exit speeds, except that the exit is to your face.

A rocket-powered punch isn’t a crazy science fiction scheme either. Kinetic energy is more affected by velocity than mass. In the equations, the velocity term is squared—or multiplied by itself—meaning that doubling the speed will quadruple the kinetic energy (while doubling the mass only doubles the energy). The elbow rocket then allows Gispsy Danger to punch far beyond its weight (but why it didn’t use its swords the whole time is beyond me.)

The thrust required to accelerate the arm is huge too. It would be equivalent to a Saturn V rocket, meaning that the jaeger could theoretically throw a one-kilogram object directly into space with the energy behind its punch. Of course, spending so much time near the sea, a jaeger could tee up a kaiju hit with a similar kinetic energy as the rocket punch by slapping the kaiju in the face with a blue whale (yes, I did the math).

BONUS SCIENCE: Could a Kaiju Fly Into Space? 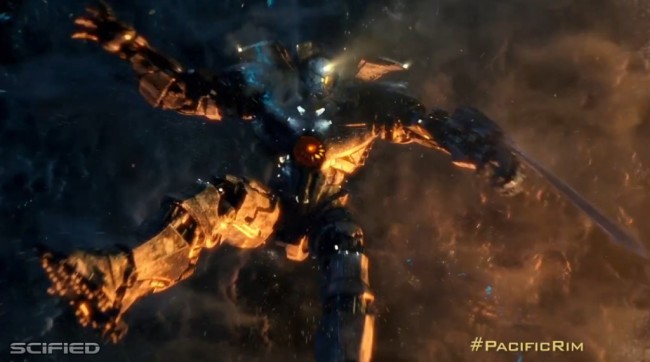 Right after we see the jaeger Gipsy Danger punch the kaiju codenamed Leatherback in the face with what is effectively a taxiing 747, the kaiju codenamed Otachi spreads its wings to carry the jaeger into the upper atmosphere (presumably to drop it back down again). Before it gets too far, Gispy unsheathes a giant sword and triumphantly removes one of Otachi’s wings, slaying the great beast.

This again begs a nerdy question: Can you simply flap some wings hard enough and get into the upper atmosphere?

In 1975, a vulture with a 10-foot wingspan—an Rüppell's griffon—was sucked into an airplane engine at nearly 38,000 feet. If the flying kaiju is similarly proportioned, this gives us some idea of how high it could go. But looking again at the film (I’ve seen it three times now), we can clearly see the curvature of the Earth. In fact, there’s more space in the shot than surface. A better estimate of the height might be the greatest free-fall in human history—the drop of Felix Baumgartner. This brave man rocketed towards Earth starting from 128,000 feet in the atmosphere. Either limit puts the jaeger-carrying kaiju squarely in the stratosphere.

But unless the monstrous kaiju can also supply a monstrous amount of force—like a Saturn V rocket—or has wings with gargantuan surface are, there is no way the kaiju could get so high.

The only way to fly is to fight. With each downward thrust of a wing air is pushed down, and therefore the air pushes back up on the wing. This is fine in the lower atmosphere where air is dense, but it gets thinner the higher you go. There is less air to push against and so you must fight harder and harder until flight ultimately fails. Not only is there hardly anything to push on up there, but there is hardly anything to breathe. Like the baby kaiju choking to death in mere seconds, the flying Otachi wouldn’t make it very far.

Either way, the kaiju doesn’t need to get into the stratosphere to execute a successful jaeger drop (or bomb, if you will). Something the size of the Statue of Liberty, if dropped, will reach terminal velocity in much less than 100,000 feet.

-- *The weight I used was based on the original blueprints

released before the movie came out. The wikia for the film

now has a revised weight that is substantially smaller. I went with the original blueprint for the sake of nerd purity. Read More: