Over 8,000 People Evacuated on Ambae in Vanuatu 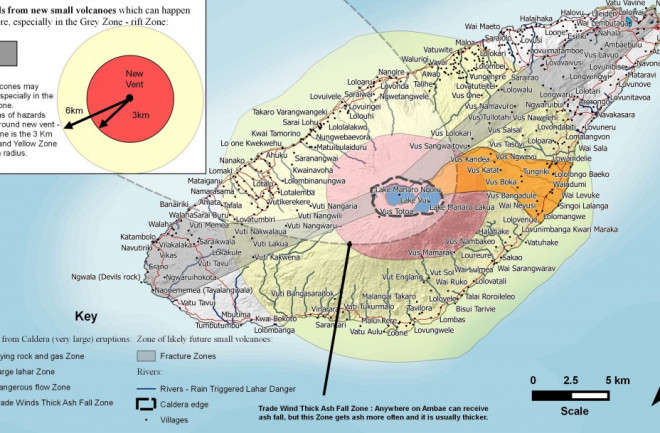 Map of volcanic hazards for Ambae in Vanuatu. VMGD One large-scale evacuation is already occurring in Indonesia as Agung remains restless, but in the South Pacific, another volcano is causing nearly as much trouble. Manaro Voui, on Ambae in the island nation of Vanuatu, has seen its eruptive activity increase dramatically, so much so that authorities have ordered over 8,000 people to evacuate (UPDATE: some of which have now left the island). The island itself has a total population of only ~11,500, so over 2/3 of the population has been asked to move to the far side of the island due to the activity at Ambae. Grey ash plumes (below) have been produced over the last few days as the activity has increased. UPDATE 9/25: New Zealand will be sending a team to survey the volcano. A state of emergency has been declared on Ambae with a large exclusion zone around the volcano.

The Council of Ministers has just declared a State of Emergency on Ambae Island to allow use of public funds to respond to the level 4 alert pic.twitter.com/NmsapRmvCw

(bursts of lava from the erupting vent). However, the character of the eruptions has changed ion the last week, with a new lava fountain from the vent

. Eruptions in 2005 caused people to leave one half of the island over 3 months while more violent explosions rocked the volcano. The volcano also hosts a number of acidic lakes in the craters at the summit of the shield volcano. This mixture of lava and water meant many of the eruptions were more explosive than the basaltic nature of the lava

built an entirely new volcanic island inside the summit lake. The volcanic hazard map for Ambae (above) shows how much of the island is potentially threatened by pyroclastic flows, while the areas near the volcano could see lava bombs or other volcanic debris (known as tephra). Volcanic mudflows (lahars) are also a potential hazard for the eastern side of the island. Unlike other shield volcanoes like Kilaeau

on Hawaii, Aoba is more explosive in its character, with multiple calderas as part of the pyroclastic shield made of the debris of the volcano's violent blasts.