Over 70 Years of Silence from Italy's Vesuvius 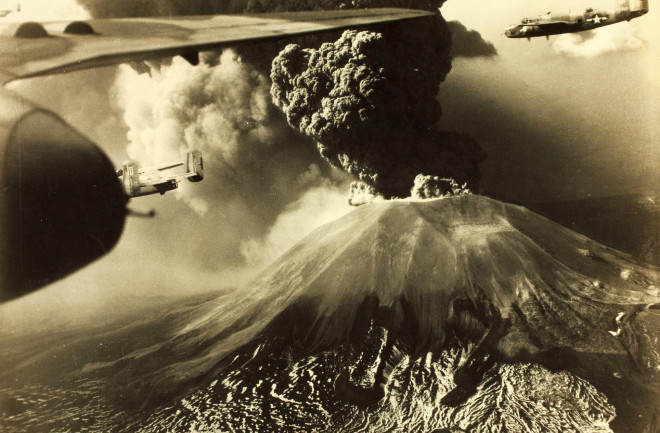 B-25 Mitchells of the 340th Bombardment Group flying in front of Vesuvius during March 1944.

12th USAAF, 340th Bomb Group This week marks the 71st anniversary of the most recent eruption from Italy's famed Vesuvius. Not only is the volcano one of the most picturesque in the world, but also can be argued to be the most dangerous. However, Vesuvius has been remarkably quiet for the last 71 years after thousands of years of activity. Does this mean we can expect another eruption from Vesuvius in the near future? All the signs right now would suggest not, but by no means is the threat that the volcano poses on the Bay of Naples area diminished. For most people, when you mention Vesuvius, they might think of the 79 AD eruption that buried Pompeii and Herculaneum. The victims of that eruption were forever cast in their death poses by ash fall and pyroclastic flowsfrom Vesuvius. It was also the eruption that Pliny the Younger observed from across the Bay of Naples. His vivid descriptions of the eruption lead volcanologists to name the style of eruption -- a towering ash plume that reaches neutral bouynacy over 30 kilometers above the volcano, forming an umbrella-shaped cloud -- a Plinian eruption. However, like many famous volcanoes, Vesuvius' history is much more than the single eruption in 79 AD. Since that eruption, the volcano has produced dozens of eruptions, many of which were VEI 3 or greater and 6 of those were as big if not bigger than the 1980 eruption of Mount St. Helens. In fact, the 1631 eruption of Vesuvius was as powerful as the 79 AD eruption, yet far fewer know about it even though as many as 6,000 people may have died in that event.

Airman brushing ash from the March 1944 eruption of Vesuvius from the wing of an American B-25.

United States Army Air Force - National Archives and Records Administration The 1944 eruption of Vesuvius was one to behold. Italy was beginning to emerge from its time as an Axis power and Allied forces were occupying the Bay of Naples. You can get the mood from this excellent newsreel about the eruption from 1944. It has some amazing footage of lava flows from Vesuvius knocking down walls in the towns that had built up on the slopes of the volcano. Even the relics of St. Januarius were trotted out to help fight back the lava from the volcano. Not only that, but Allied B-25s of the 340th Bombardment Group were stationed almost at the foot of the volcano. Over 80 planes were destroyed by the ash fall from the eruption (see above), with Vesuvius taking out more B-25s than a Nazi air raid later in the year. Don Kaiser has a great site that recounts the events that lead up to the eruption and the eruption itself. The personal recollections of airmen stationed near Vesuvius capture what an astonishing set of circumstances it must have been for most of them -- fighting a war in Europe and now a volcano erupts in their midsts. The continental United States had not experienced anything like this since the 1915 eruption at Lassen Peak in remote northern California, so few airmen would have any experience, either directly or through stories, of a volcanic eruption. The lava and ash from Vesuvius must have seemed like the Earth joining in on the battle taking place across Europe.

RAF Spitfires flying around a still-steaming Vesuvius after the March 1944 eruption. Dark, cooling lava flows are evident on the slopes of the volcano.

Baker L H (Fg Off), Royal Air Force official photographer Since 1944, nothing has happened at Vesuvius. After centuries of restlessness punctuated by large explosive eruptions, Vesuvius seems to have slipped into a bit of a nap. This doesn't mean that Vesuvius is done or that the volcano is any less hazardous. In fact, this quiet makes it potentially more challenging to create a volcanic mitigation plan for the area around Vesuvius because there isn't agreement about what exactly the future holds for one of Europe's most prominent volcanoes. Some volcanologists think that Vesuvius has the potential for another very large eruption, on the scale of the 1631 or 79 AD event. This is based on geophysical evidence derived from looking at how seismic waves generated by earthquakes move underneath the volcano. They suggest that there might be partially molten material (read: magma) at a depth of 8 to 10 kilometers below Vesuvius. Now, the tricky thing here is whether this magma is able to erupt or not. It very well could merely be cooling magma from the long bout of activity the volcano just wrapped up. Others think that over the past 20,000 years, the magmatic system has fundamentally changed under the volcano. Instead of a deep chamber that can produce very large explosive eruptions, they suggest that the magmatic system is getting shallower (the 1944 eruption magma may have been stored only a few kilometers down) and thus less likely to produce a massive explosive eruption.

A view of Vesuvius and the shores of the Bay of Naples.

Viaobonito / Wikimedia Commons In either scenario, planning is the key for saving lives when Vesuvius rumbles back to life. The metropolitan area around Naples has a population over 3 million, meaning any evacuation that might be needed could be some of the most challenging that we've experienced around a volcano. The roads around Naples aren't designed for the immense volume of traffic. Most moderate eruption scenarios (akin to the 1944 event) would rain a few centimeters of ash on the area around the volcano, includes Naples itself. Worst case scenario models, using some of Vesuvius' largest eruptions, would bury downtown Naples in meters of ash. Pyroclastic flows have made it from the summit to the sea (as we saw in 79 AD) and lava flows can easier make it to the many homes that have been built on the slopes of the volcano. Let's put it this way: the situation around Naples and Vesuvius is like if we moved Rainier to the edge of the city of Seattle ... and that's not even including the Campi Flegrei caldera on the far side of the Bay of Naples! The other problem that arises from the relatively long quiet of Vesuvius is that fewer and fewer people were alive during its last eruption. Hazard planners are well aware of the idea that the perceived threat of a disaster diminishes greatly as the memory of the last eruption fades. Convincing people to prepare now for the next Vesuvius eruption is challenging when they see a picturesque (and to them, benign) mountain in the outskirts of town. 71 years might seem like a long time on the human timescale, but for a volcano with 300,000 years of activity recorded in its slopes, this is nothing. Don't be fooled, Vesuvius has all the ingredients for a volcanic disaster: a track record of explosive eruptions, a silence long enough to lull people into complacency and a large population center at its doorstep.