Over 30 Hikers Die During Ontake Eruption in Japan: What Happened? 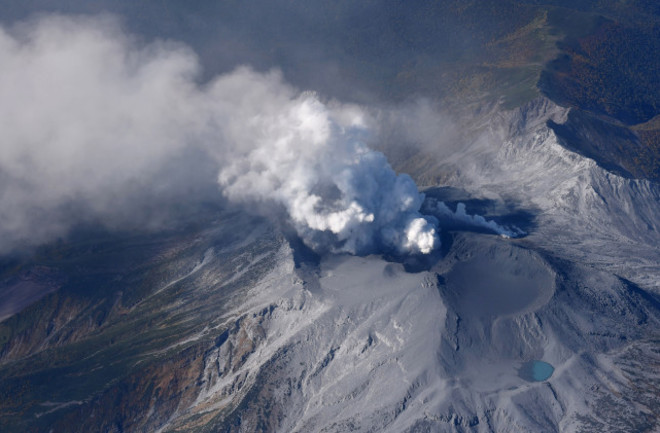 The growing ash cloud from the September 27, 2014 eruption of Ontake in Japan.

Masanori Genko/AP After Saturday's news about the unexpected eruption at Ontake, we are finally getting the full, grim picture of the extent of death at the Japanese volcano. Authorities in the area has said that over 30 people have been found on the volcano and most of them are likely dead from effects of the eruption. This would make this eruption one of the most deadly in the past 30 years. The description of the many of the deaths suggest that ash inhalation may have been the primary cause of death, but this is very preliminary before more investigation. Images of the summit area show buildings buried in ash so more dead or injured may be found as the search continues. Some people continue to be stranded on the volcano as it continues to produce a small steam plume from its summit crater - you can see it on the Ontake webcam. The question now is: what happened? Japan has one of the most sophisticated volcano monitoring networks in the world but from what it seems, this eruption was completely unexpected. Did someone miss a sign or did the network fail? My guess is the answer to both of those questions is "no". Based on what I've read and seen (and this is speculation on my part), this eruption may have been a steam-driven explosion known as a "phreatic" eruption. The Japanese Meteorological Agency suggested that even compared to a smaller eruption in 2007, this explosion (see below) had almost no warning. This occurs when water seeps into the cracks in the crater area of a volcano and gets hot enough to flash to steam. This rapid boiling causes fracturing of the rock and explosively ejects material out of the crater as the pressure inside the crater or conduit goes up exponentially. This explosion then produces ash clouds and pyroclastic flows made mostly of the shattered debris of old rock at the crater rather than new magma. Although phreatic explosions can be small, they don't necessarily need to be as they can even become "phreatoplinian", with ash columns that reach tens of kilometers into the air above the volcano.

Aqua MODIS image of the Ontake ash plume, seen on September 27, 2014. Photo by NASA. Now, with a phreatic eruption, a lot of the common monitoring methods just don't work. There are rarely noticeable earthquakes or tremor as those phenomena are caused mainly by magma movement. There isn't an increase in gas emissions like carbon dioxide or sulfur dioxide as little-to-no new magma is rising in the volcano releasing these gases. There is even little deformation to the volcano as no magma is forcing its way up. The only signal could be increasing temperature of fumarole and crater lakes as the crater vent area heats up -- but that might not even be necessary. So, you're left with a volcano that will produce an explosive eruption without any precursors. This is what happened in the last few years at places like Mayon in the Philippines, where last year 5 hikers died during a phreatic explosion at its summit that had no precursors. Phreatic explosions are common at many volcanoes as groundwater percolates into the crater, heats up and boils catastrophically. The hikers on Ontake knew they were hiking on a volcano, but there likely had no real indication that anything was about to happen if this eruption was indeed a large phreatic explosion. Ontake has a limited history of phreatic explosions but so do most volcanoes in settings like Japan (or the Cascades for that matter). You can argue whether they truly knew the risk on hiking on an active volcano, but how many people hike at places like Mount St. Helens, Lassen Volcano National Park or Mount Rainier every day without specific knowledge that they are hiking on a potentially active and explosive volcano? How do you prepare yourself if you're hiking in volcanic terranes? Here are a few tips:

Many people are quick to blame the hikers or the volcanologists for not "predicting" what might happen. That isn't the game of volcano monitoring -- there is no way to predict all eruptions (or, in fact, most of them). It is a tragedy how many people died on Ontake in what might have been moderate eruption, but as with much in nature, random events happen that are unpredictable. For the millions of people who hike on volcanoes every day, there will be the few who don't return because volcanoes are dynamic, active features on our planet. Don't let that scare you, but also treat volcanoes with the respect they clearly deserve.