Our Sun May Have Migrated From Its Galactic Birthplace 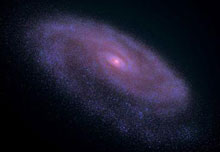 Our sun, which lies 26,000 light years from the center of the the Milky Way, may have been born in a different part of the galaxy and later migrated to its current position, about halfway towards the galaxy's outer edge. A new study defies the conventional wisdom that stars spend their entire lifespans in the same galactic region, and calls into question astronomers' theory that galaxies have certain fixed "habitable zones" where life is more likely to evolve.

"Our view of the extent of the habitable zone is based in part on the idea that certain chemical elements necessary for life are available in some parts of a galaxy's disk but not others," said [lead researcher] Rok Roskar.... "If stars migrate, then that zone can't be a stationary place" [Astrobiology Magazine].

Astronomers simulated the formation of the Milky Way starting 10 billion years ago, when gas and dark matter from the Big Bang (about 4 billion years before) had begun to condense.

By about nine billion years ago, the material for the galactic disk had mostly come together, but the actual disk formation hadn’t started. Scientists simulated the formation and evolution of the galaxy from that point [Scientific American].

As the simulated galaxy evolved on its own, researchers saw that the orbit of some stars around the galactic center changed drastically. The migrations were a result of individual stars' interactions with the bulk of the galaxy's spiral arms.

A star trailing close behind a spiral arm will feel an extra pull from the arm's intense gravity. This will boost the speed of the star, sending it into orbit farther from the galactic centre. Conversely, a star moving in front of an armful of stars will get dragged backwards, prompting it to slow and move closer to the centre of the galaxy [New Scientist].

The study, published in The Astrophysical Journal Letters [subscription required], suggests that as many of 50 percent of stars near our Sun could have originated elsewhere.

Migrating stars also help explain a long-standing problem in the chemical mix of stars in the neighborhood of our solar system, which has long been known to be more mixed and diluted than would be expected if stars spent their entire lives where they were born. By bringing in stars from very different starting locations, the sun's neighborhood has become a more diverse and interesting place, the researcher said [Astrobiology Magazine].

The SciencesThe Steady State: When Astronomers Tried to Overthrow the Big Bang