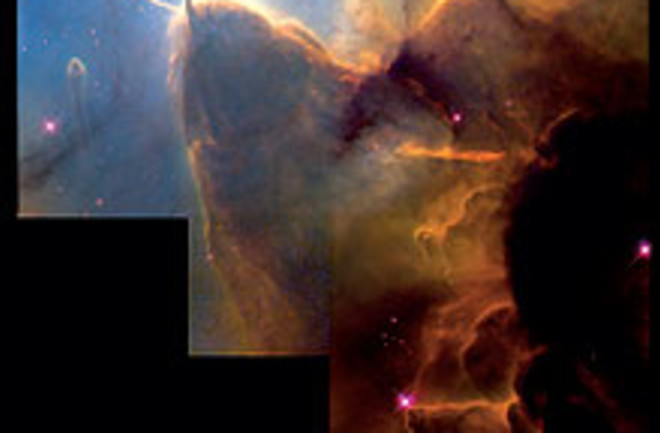 Massive stars forming in the Trifid nebula quickly age and explode, spraying their neighbors with radioactivity. | Courtesy of NASA/HST/Jeff Hester

An 11-pound meteorite that slammed into eastern China two decades ago offers strong new evidence that a massive stellar blast helped shape the evolution of our infant solar system.

A team of Chinese and American researchers found the chemical fingerprint of a radioactive variety of chlorine—chlorine-36—embedded within a pocket of the Ningqiang meteorite. The element—which doesn’t exist in today’s solar system but can be traced through its decay product, sulfur-36—can be created two ways. The first requires a supernova, “which, during the process of exploding itself all over the place, forms these weird isotopes,” says cosmochemist Laurie Leshin of Arizona State University, who worked on the study. Alternatively, strong radiation streaming off the sun when it was young could have reacted with gas and dust nearby, triggering nuclear reactions that created chlorine-36 and other isotopes.

Researchers favored the second explanation, figuring that a supernova close to our budding solar system would have blasted our sun and its protoplanetary disk into bits. Computer modeling, however, shows that an explosion in our neighborhood could have shrunk the disk but not necessarily destroyed it. The chlorine-36 fingerprint in the meteorite adds weight to the supernova camp. While chlorine-36 could have formed near the young sun, been transported hundreds of

millions of miles out to the asteroid belt, and then returned in a meteorite, Leshin says that idea is “basically a completely implausible scenario. The only way to do this is with a supernova that sprinkled the whole solar system with stuff, out where the asteroids formed.”