Our Solar System Has a Tail

Protons and electrons from the sun create a so-called heliotail, first imaged this year. 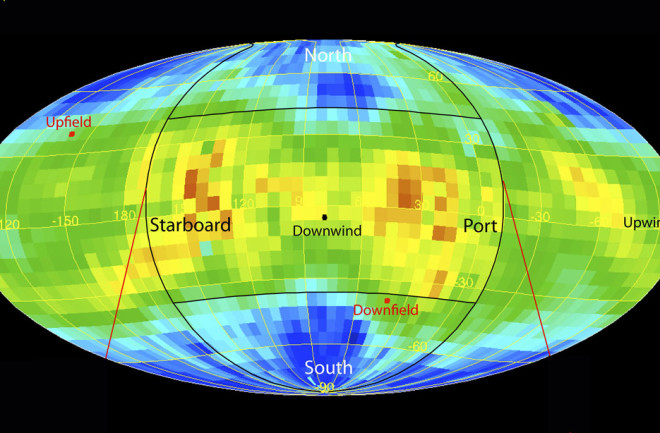 As long suspected, the solar system has an entourage: Charged particles trail it, comet-like, as it zooms through the Milky Way. This so-called heliotail, which stretches for tens of billions of miles, is made of protons and electrons streaming from the sun. Last year, NASA’s Earth-orbiting Interstellar Boundary Explorer (IBEX) satellite provided the first real view of this tail and its surprising shape.

The heliotail of another star in our galaxy — the red giant Mira — leaves a trail of “seeds” for new solar systems. (Credit: NASA/HST/R.Casalegno/GALEX)

By sensing the trajectories of neutrally charged heliotail atoms that are aimed at Earth, IBEX maps the tail’s general form. In cross-section, it has a lobed structure like a four-leaf clover. Slow-moving particles from the sun’s equator flow from one flank across to the other, and fast, higher-energy particles from the poles flow through the top and bottom. The satellite shows how the solar system interacts with the galaxy, says David McComas, IBEX principal investigator at Southwest Research Institute: “It lets you make images of what could never be seen before.”

This article originally appeared in print as "Our Solar System Has a Tail."