New research might explain why the far side of the moon looks so different from the other side. 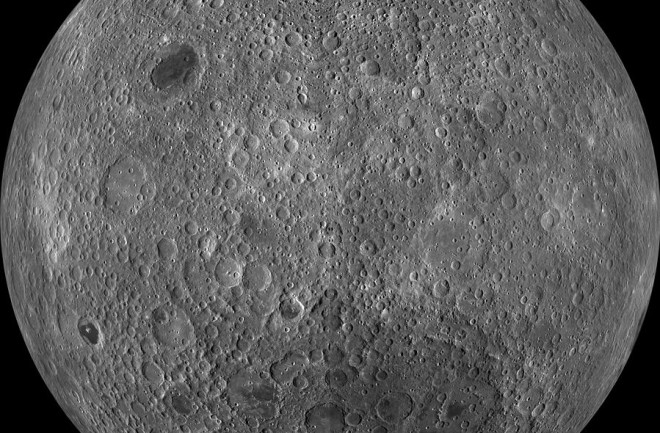 The moon’s far side, as photographed by the Lunar Reconnaissance Orbiter. (Credit: NASA/GSFC/Arizona State University)

The familiar lunar vista humans see when they look up at night reveals a face with dark “seas” and bright craters. The mysterious far side, which wasn’t revealed until humans started sending probes and then people in the 1960s, is far more heavily cratered, with few of the dark plains of the near side.

But what caused the two sides to be so different? That’s been a matter of debate.

Now, researchers led by Meng-Hua Zhu, from the Macau University of Science and Technology, say that a dwarf planet striking the moon sometime after its initial formation could have caused the lopsided world we see today. They published their research May 20 in the Journal of Geophysical Research: Planets.

A Series of Planet-sized Collisions

The standard story of the moon’s formation is that sometime in Earth’s early history, a planet-sized body struck our planet, throwing material high into space, where it eventually coalesced into the moon we see today. But even this dramatic tale can’t explain all the oddities of Earth’s moon, like the difference between the moon’s near and far sides.

A clue came in 2012, when NASA’s GRAIL mission showed that the lunar near side has a thinner crust than the far side.

So over the years, as both sides suffered numerous asteroid strikes, the near side cracked open. The outpouring lava filled basins and hardened into the dark maria, or plains, we see today. But the far side has a thicker crust, so there’s just a lot of cratering. But the puzzle of why the two hemispheres have different thicknesses to begin with is harder to explain.

One way to solve the problem is if a small world – about the size of the dwarf planet Ceres, which resides in the asteroid belt – were to have hit the moon’s near side after it had already formed and solidified. The impact would have thrown up material, and when the material resettled, it could have fallen mainly on the far side of the moon, burying it under 3 to 6 miles of lunar regolith. Zhu and colleagues ran a series of computer simulations to test this scenario, and found that an object ramming the early moon at between 14,000 and 15,000 miles per hour would recreate the moon as we see it today. That may sound fast, but it’s only about a quarter the speed of most small meteors that hit Earth.

The impact could also help clear up some of the long-standing questions about the materials that make up the moon. They are both very Earth-like in some ways – a sign that the moon did indeed form out of Earth debris – and dissimilar in other ways, pointing to additions from an outside world.

That would make our moon a composite of three different large bodies — a different sort of three-body problem.