Our Growing Intolerance of Violence, As Heard in the Courtroom 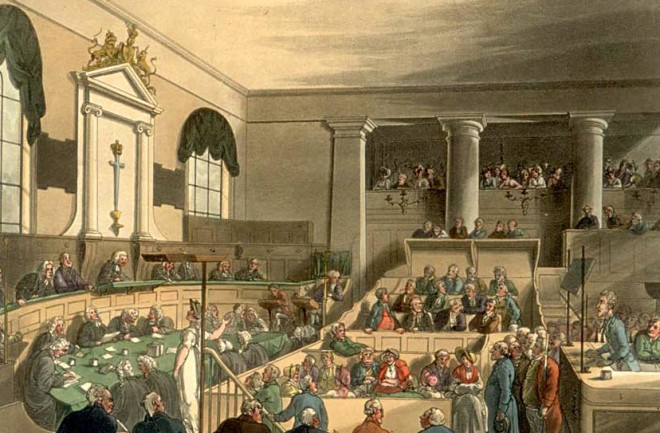 An Old Bailey trial, circa 1808. (Credit: Thomas Rowlandson/Bridgeman) Author E.M. Forster is purported to have written, "How do I know what I think until I see what I say?" The same principle has now been applied to understand what society thought about violence hundreds of years ago – by seeing what they said in the courtroom. Scientists performed a linguistic analysis of digitized trial transcripts from the Old Bailey, London’s oldest criminal court, to reveal society’s stricter attitudes toward violence between 1760 and 1913. Their study presents the first hard data on the emergence of societal norms and bureaucratic systems meant to control violent behavior.

There was a time when violent and nonviolent crimes – armed assault versus petty theft, for instance – were essentially treated the same in London courts. But around the emergence of the Victorian era, society grew far less tolerant of violence, and the proof is in they way people talked about it. Researchers, with the aid of powerful computers, sifted through every word uttered during the 150-year timeframe, which included more than 112,000 trials and roughly 20 million keywords. They organized words into broad categories and then, using a mathematical measure known as the Jensen-Shannon divergence, calculated the lexical difference between trials for violent and nonviolent crimes. They found that, prior to 1790, there was no distinguishable difference between the words used for violent and nonviolent crimes. You were just as likely to see “wound” or “blade” in a trial about petty theft as about a robbery at knife-point. But in 1790, the language used in the courtroom starts to diverge, and it becomes easier to distinguish trials pertaining to violent and nonviolent crimes.

By the mid 1800s the courts started treating violence more gravely. There was an increase in words to specifically describe the weapon, the type of violence and whether a person needed a doctor or hospitalization. The linguistic analysis also revealed an increased focus on less lethal varieties of violence, reflected in greater used of words such as “push” and “knock,” which signaled society’s decreased tolerance for physical violence.

On the other hand, nonviolent trials were marked by an increased focus on money, bills and records, which reflected growing attention to criminal fraud and theft. Researchers published their findings this week in the journal

Researchers say the way people talked about violence in the courts coincided with a dramatic decrease in violent crime in Western society, which many scholars call the “civilizing process.”

While other researchers have used traditional historical methodologies to study the civilizing process, this investigation was the first to track the trend using data gleaned from people’s words.