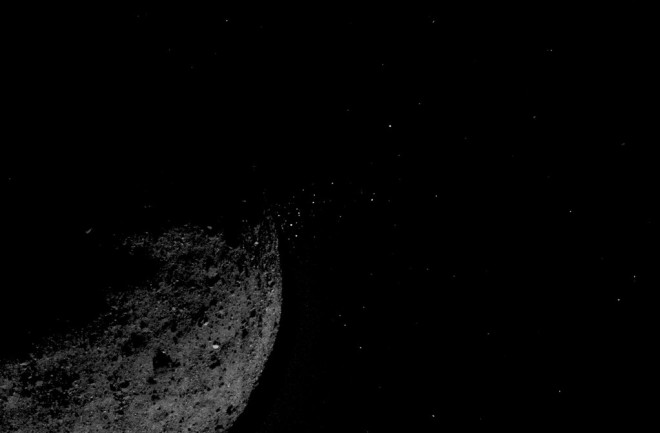 One of asteroid Bennu’s biggest surprises comes from the bursts of particles it sometimes sends flying into space, where OSIRIS-REx captures sight of them. (Credit: NASA/Goddard/University of Arizona/Lockheed Martin) Right now, there are two missions exploring asteroids in our solar system. NASA’s OSIRIS-REx mission is revealing surprises at its asteroid home called Bennu. It arrived there not long after Japan’s similar Hayabusa2 sample-return mission reached asteroid Ryugu. So far, NASA’s mission is finding similarities with Ryugu, as well as big differences, scientists announced on Tuesday. Both asteroids are more rugged and rocky than anticipated. But Bennu also revealed surprising flurries of material ejected from its surface on some dozen occasions since OSIRIS-REx’s arrival. Scientists are still investigating how and why the asteroid is flinging small rocks into space.

The Story So Far

OSIRIS-REx originally planned to have a landing zone 160 feet across (shown in white circle). But the rugged terrain means it will instead have to aim for a much smaller safe area, like the smooth patch at top left. (Credit: NASA/Goddard/University of Arizona) Bennu, like Ryugu, appears to be a spinning top made of loose rubble. It’s also rocky and wild, which has caused both teams to re-evaluate their sample collection. Originally, both assumed they could have spacious landing zones. But the abundance of large boulders meant the teams will need much better aim to safely touch down and collect the material they hope to bring home to Earth. Hayabusa2 accomplished this once already. OSIRIS-REx, which arrived at its target later, is still searching for a good site. But Dante Lauretta, the NASA mission’s principle investigator, says that the navigation and system performance are “exquisite,” and that he’s confident they’ll make their new “bullseye tag.” He spoke today at a press conference at the 50^th Lunar and Planetary Science Conference, to accompany his team’s publication of multiple Nature papers on OSIRIS-REx’s mission so far. The team is still scouring Bennu for a good place to snag a sample. They should make a decision sometime this summer, but they won't actually collect a sample until summer 2020. At that time, OSIRIS-REx will descend to just above the surface, and send out a puff of nitrogen gas to stir up dust grains from Bennu’s surface. Despite Bennu’s surface being littered with large rocks, the team says they have identified areas that are smoother that could serve as collection sites. In the meantime, OSIRIS-REx is sending back images and data already. In what Lauretta called perhaps “one of the biggest surprises of my career,” there was the spectacle that greeted OSIRIS-REx after only six days in orbit. Dozens to hundreds of particles, from pebbles up to fist-sized rocks, were flying at high speeds off of Bennu’s surface. Some of these particles fall back to Bennu’s surface, some fly away into space, and some enter orbit around Bennu, like a fleet of tiny satellites. OSIRIS-REx spied 11 similar events throughout January and February. The ejections seem to happen in sudden bursts, from specific locations on Bennu’s surface, but researchers still aren’t sure what causes them. After consideration, researchers decided they don’t need to worry about the spacecraft’s safety from these events. But they are excited to catch a glimpse of such a rare phenomenon. While a few other active asteroids are known, they represent only a few dozen out of the thousands of observed asteroids in the solar system – and have never been seen from such a prized vantage point.