OSIRIS-REx and its asteroid sampling comrades 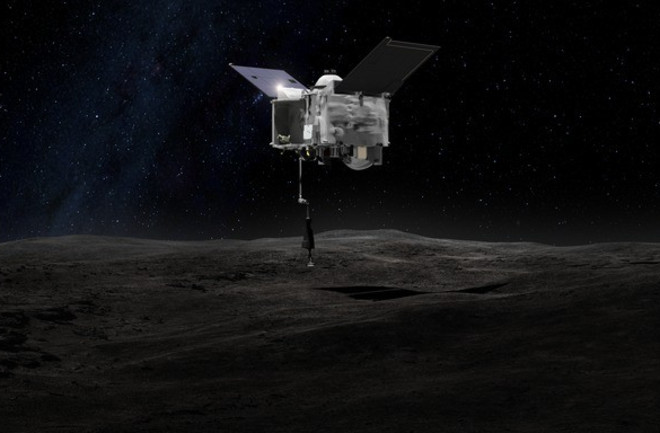 In this illustration, OSIRIS-REx approaches asteroid Bennu in preparation of snagging a sample. (Credit: NASA's Goddard Space Flight Center Conceptual Image Lab) Last week, NASA launched its newest spacecraft on a mission to sample an asteroid and send that collected rock and dust back to Earth. The OSIRIS-REx spacecraft (short for Origins, Spectral Interpretation, Resource Identification, Security-Regolith Explorer) is on a two-year journey to Bennu, an asteroid about 1,600 feet (290 meters) wide and orbiting the Sun in a similar orbit to Earth’s. The spacecraft will get to Bennu in August 2018, and spend the next two years surveying the space rock. It will produce a range of different types of maps — photographic, altitude measurements, mineral maps, heat maps — and from those data, scientists will chose a location on the asteroid to snag samples. In the summer of 2020, the spacecraft will then approach the chosen location and stretch out its robotic arm. An instrument at the end of the arm will send out a puff of gas to agitate the surface material, and any loose rocks and dust will be sucked up into a capsule. (I really hope we get to see video footage of this …) In the following spring, OSIRIS-REx will head back to Earth. Then on September 24, 2023, the spacecraft will let go of its capsule holding the sampled material, and send it plunging through Earth’s atmosphere. Finally, scientists will have pristine material from asteroid Bennu. But it’s not the first pristine material from any asteroid. Japan beat NASA to that title 6 years ago, when its Hayabusa spacecraft returned a bit of dust from asteroid Itokawa. That mission launched in 2003 to orbit the asteroid (which is about the same size as, but more potato-shaped than, Bennu) before touching down on its surface. The sampling process didn’t go quite as planned, unfortunately. The craft was supposed to fire small metal projectiles into the asteroid to loosen bits of rock and dust from the surface, but those didn’t fire. Instead Hayabusa collected only the dust that flung upward when the craft landed. That sampled dust, only about 1 milligram of uncontaminated material, arrived on Earth in June 2010. For comparison, OSIRIS-REx is expected to collect between 2 ounces (60 grams) and 4.4 pounds (2 kilograms) of material. The Japanese Aerospace Exploration Agency (JAXA) launched its second asteroid-sampler, Hayabusa2, on December 3, 2014. It should arrive at its target, asteroid Ryugu, in mid-2018. And in late 2019, Hayabusa2 will head back toward Earth carrying several grams of rocky asteroid material. This sample is expected to touch down on our planet in late 2020 — still nearly three years before OSIRIS-REx’s sample reaches us. Asteroid array At first glance, it might seem a bit repetitive to have three asteroid sample-return missions, but they’re actually going after very different targets. Just like planets and stars come in many varieties, so do asteroids (and comets, for that matter). Hayabusa studied an S-type asteroid, Hyabusa2 is on its way to a C-type asteroid, and OSIRIS-REx is hurtling toward a B-type asteroid. So what’s the difference? These classifications refer to the asteroid’s appearance and thus surface composition. S-type is stony or silicate materials. These tend to be lighter-colored material so they reflect more Sunlight than other asteroid types. C-types are the most common, and are carbonaceous with darker, coal-like surfaces. B-type asteroids are a subclass of C-type, but even darker surfaces (B is for black — creative). The different surface brightnesses come not just from the differing materials that make up the asteroids, but also from the effects of “space weathering.” When high-speed subatomic particles (from the Sun or from even farther away) or pieces of dust slam into any space object, it can change the surface in many ways: like cratering, color tweaks, and chemical composition changes. By sending these missions to different asteroid types, scientists are investigating the broad spectrum of space rocks. Did these different types of rocks form through different processes? How much larger were their parent bodies? Are their compositions what we actually think they are? (And, of course, what do these asteroids tell us about how life arose on our planet?) Plus, with each mission come more advanced technologies — better cameras and other detectors, and improvements about how to gather sample material (and hopefully avoid the mistakes of the past). Save