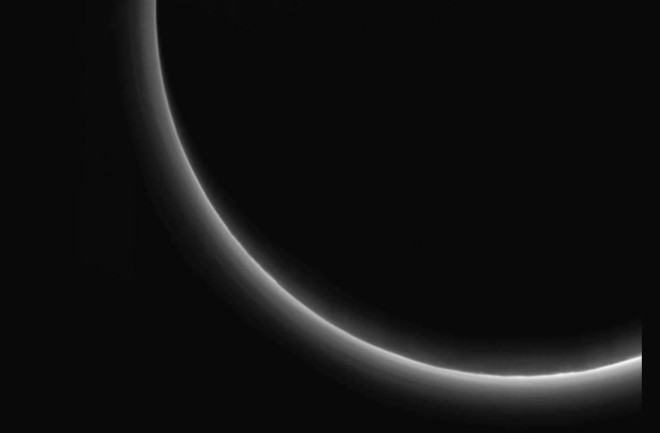 Speeding away from Pluto just seven hours after its July 14 closest approach, the New Horizons spacecraft captured this spectacular image of Pluto’s atmosphere, backlit by the sun. The atmospheric glow comes from layers of haze several times higher than scientists predicted.(Source: NASA/Johns Hopkins University Applied Physics Laboratory/Southwest Research Institute) I'm just catching up on some of the recent spectacular imagery of Pluto sent back by the New Horizons spacecraft during its flyby, and this one really caught my eye. This beautiful image of sunlight streaming through the atmosphere was captured by the Long Range Reconnaissance Imager instrument, known as LORRI. The spacecraft was racing away from Pluto at the time, just seven hours after its closest approach on July 14, 2015. But the image isn't just beautiful. It actually astounded New Horizons' scientists, who were not expecting Pluto's atmosphere to be so thick. They also were surprised to find distinct layering. Pluto's backlighting by the Sun allowed them to determine that one layer of haze in the atmosphere extends about 30 miles (50 kilometers) above Pluto's surface. The other runs from there to about 80 miles (130 kilometers) high. “The hazes detected in this image are a key element in creating the complex hydrocarbon compounds that give Pluto’s surface its reddish hue,” says Michael Summers, New Horizons co-investigator at George Mason University in Fairfax, Virginia.

Multiple images from New Horizons’ LORRI and Ralph instruments were combined to create this true-color view of Pluto. (The lower right edge lacks high-resolution color coverage.) The images, taken when the spacecraft was 280,000 miles away, show features as small as 1.4 miles across. (Source: NASA/Johns Hopkins University Applied Physics Laboratory/Southwest Research Institute) You can see that reddish hue in the image above. It's coming from compounds called tholins that are raining out of Pluto's atmosphere. I prefer another name for those compounds: "organic brown gunk." That's what Sarah Hörst calls them in a detailed post at the Planetary Society blog about the processes that produce tholins. As Hörst relates the story, Carl Sagan and other folks in his lab at Cornell discovered tholins back in the 1970s by irradiating various gases. Here's a snippet from their paper in Nature about what they found:

It is clearly not a polymer—a repetition of the same monomeric unit—and some other term is needed. We have discussed this material as a constituent of the Earth’s primitive oceans and therefore as relevant to the origin of life; as a component of red aerosols in the atmospheres of the outer planets and Titan; as present in comets, carbonaceous chondrites, and pre-planetary solar nebulae; and as a major constituent of the interstellar medium, which is the concept discussed here. We propose, as a model-free descriptive term, ‘tholins’ (Gk ϴὸλος, muddy; but also ϴoλòς, vault or dome), although we were tempted by the phrase ‘star-tar’.

Star tar! Outstanding!  This NASA video explains tholin formation on Pluto: https://youtu.be/xJ1w_it-CQQ Here's what you're looking at: Ultraviolet sunlight breaks up methane gas particles in Pluto's atmosphere. This leads to the buildup of more complex gaseous compounds, such as ethylene and acetylene. As with methane gas, these were found in Pluto's atmosphere by New Horizons. Next, the ethylene, acetylene and other complex hydrocarbon gases fall to lower — and colder — regions of Pluto's atmosphere. The frigid temperatures cause the gases to condense into ice particles that create the hazes. Lastly, ultraviolet radiation in sunlight chemically converts the hazes into the organic brown gunk — Carl Sagan's tholins. So I'm wondering whether the stuff seen by New Horizons should be given an informal name: Plutonic tar.