Advances in spaceship propulsion are speeding up, promising a means to finally explore the outer solar system. 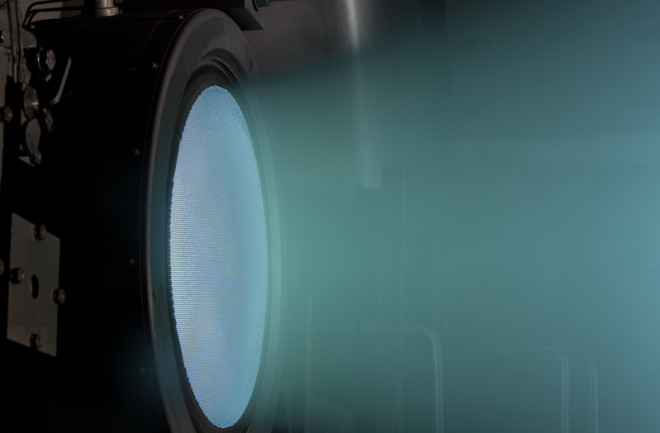 An ion thruster fires at a test facility in Cleveland. | NASA

On Jan. 19, 2006, the New Horizons spacecraft roared off the pad in Cape Canaveral, Fla., and into the record books. Perched atop a giant Atlas V rocket, the lightweight probe accelerated to about 36,000 mph, the fastest object ever launched by humans. It outdistanced the moon in nine hours, reached the orbit of Mars in 11 weeks and swung around Jupiter in February 2007. Then came the great wait.

New Horizons will fly by Pluto this July and, if all goes well, return the first detailed images of the diminutive world and its moons. Those observations will take place more than nine years after the probe was launched, and 43 long years after the original plans for a Pluto mission. Worse, New Horizons represents an end as much as a beginning. No nation on Earth is actively planning another probe to Saturn or beyond. We are entering a period of deep interplanetary drought.

The problem is as easy to state as it is hard to solve: Space travel takes too damn long. Careers begin and end in the time it takes to mount an expedition to the outer solar system. Lives end, too. In a recent exploration strategy meeting at NASA’s Ames Research Center, Peter Tsou of the Jet Propulsion Laboratory warned his colleagues that getting a spacecraft to Saturn’s moon Enceladus might be a “multigenerational” undertaking. The sluggish pace exacerbates the perpetual mismatch between NASA’s ambitions and its budget. Long missions require a rare investment of steady, patient funding and produce a payoff that may arrive long after current politicians have left the scene.

And yet, the outer solar system is where a lot of the most interesting real estate awaits. This is where you find two extraordinary Saturnian moons: Titan, home to dozens of methane lakes, and Enceladus, which shoots out geysers laced with organic compounds. This is the realm of the dormant comets and Kuiper Belt objects that record how the solar system formed and how Earth got its water. If we want to understand the origins of our planet, and of ourselves, this is where we need to go.

The most obvious way to accelerate the process is to literally accelerate the process by latching onto a bigger, more powerful engine. This will be the likely approach for the Europa Clipper, which finally seems headed for approval after a long series of stops and starts. Tentatively slated for a 2022 launch, the probe will orbit Jupiter and make about 45 passes by the giant planet’s moon Europa, which has a global ocean just beneath its ice-covered surface. Astrobiologists consider Europa one of the most promising places to look for alien life; the probe will study its landscape and chemistry to investigate and, perhaps, to make way for a future lander.

The Dawn spacecraft used an efficient ion engine to visit Vesta (left) and Ceres (right) in this artist’s rendering. | NASA

In its current conception, the Europa Clipper will fly atop NASA’s upcoming Space Launch System, or SLS, an enormous rocket meant to carry humans into deep space. Launching on an Atlas V, like New Horizons, the Clipper would take at least six years to reach Europa. The SLS will complete the trip in one-third the time. That’s more like it.

If you have faith in NASA, more exciting rocketry options are coming soon. In conjunction with the SLS, the agency plans to develop a new solar-electric propulsion system (called SEP, because everything at NASA gets an acronym) powerful enough to grab a large chunk of asteroid and tow it into orbit around our moon. This system uses huge solar panels to generate electricity, which will energize stored xenon gas and expel it at high velocity to generate thrust. The idea is to capture a small asteroid, bring it into orbit around the moon using SEP, and then send astronauts to explore it — a daring and politically contentious concept called the Asteroid Redirect Mission.

An ion thruster fires at a test facility in Cleveland. | NASA

Assuming the tech comes together as intended, it has delicious possibilities for unmanned exploration as well, as Nathan Strange from NASA’s Jet Propulsion Laboratory explained in another presentation at the Ames strategy meeting. He calculates that a solar-electric engine mounted on an SLS rocket could ferry 28,000 pounds of cargo (equivalent to the Cassini probe plus eight Curiosity rovers) to Saturn in five years. Ah, the possibilities — and the caveats. The SLS does not exist yet. The SEP is still under development and may never happen. And this new, complex hybrid approach would likely not be cheap.

Even if you don’t have faith, though, there is good news. A more modest version of the solar-electric propulsion technology is already available and hard at work, propelling the Dawn spacecraft currently circling the dwarf planet Ceres in the asteroid belt. Dawn’s xenon engine doesn’t produce a lot of thrust, but it can keep firing for months or even years, building speed and changing course. That engine is what allowed the spacecraft to orbit the asteroid Vesta, break free, then orbit Ceres. There’s no reason why we couldn’t repeat the experiment with a whole fleet of similar probes, sending each one to multiple destinations using simple and cheap xenon engines.

Or we could go further and do away with fuel entirely. By the time you read this, the nonprofit Planetary Society should have launched a test version of a solar sail, a giant space kite that flies by harnessing the pressure of sunlight. NASA and the Japanese space agencies have flown basic prototypes as well. Even more so than a xenon engine, a space sail produces only a feeble push. But it is fundamentally inexpensive, inexhaustible and endlessly scalable. The bigger you build the sail, the more thrust you get. Tack into the photon wind, and you can steer wherever you want.

Speed Up by Slowing Down

If you are reading closely, you may have noticed that I’ve pulled a major switcheroo on you. I started out talking about going faster and ended up describing ways to go even slower. Xenon engines and solar sails are tortoises in the space race, and the low-energy paths that put them to best use can take many years to complete. But paradoxical as it sounds, slowing down might be the most effective way to speed up space exploration.

The long wait between launch and arrival is a big problem, yes, but the chasm of time between mission starts is an even bigger one. Right now there is a frustrating lack of any steady, consistent cadence to our exploration of the outer solar system. “Cadence” is a word I heard repeatedly at Ames, often expressed in a pleading tone. Without it, graduate students move to other fields, engineers head elsewhere in search of work, infrastructure crumbles, public interest drifts and funding becomes even harder to sustain.

Fortunately, cadence is a lot easier to address than the issue of speed. In this case, we already know the solution: design a lot of relatively low-cost, high-impact missions and schedule the launches so that notable new results keep coming in every year or two, not every decade or two. Xenon drives and space sails are both plausible parts of that plan. Miniaturized “CubeSat” probes, microlanders and a mix of short-duration daredevil missions and slow-going, multidestination voyagers are essential components as well. Numerous modest missions should actually make it easier to do a few big-budget shock-and-awe undertakings, like sending a submarine to Titan or sniffing those Enceladus geysers for signs of life.

New Horizons and Dawn are steps in the right direction. The former cost one-quarter as much as the Curiosity rover on Mars, the latter about one-sixth. More sobering, their combined cost, over their entire 15 years of operation, is roughly equal to the cost of 10 F-35 fighter jets.

The outer solar system is ours for the taking. All we have to do is overcome the greatest obstacle: not the rocket equation, but human inertia.