One-third of the way to Pluto!

On Alan Stern's New Horizons page, he tells us that the Pluto probe has something of a milestone today: it's 1/3 of the way to Pluto in time. In other words, it's been 1155 days since launch on January 19, 2006, and New Horizons will pass Pluto on July 14, 2015, which will be 3463 days after launch. Interestingly, it passed 1/3 of the distance it will travel to Pluto some time ago! The probe was moving fastest right after launch, but has since been decelerating due to gravity from the Sun (and initially from the Earth) [Note added later: This is not quite correct; I forgot initially that the probe picked up speed at Jupiter, so in fact it's been slowing down ever since then]. It's moving more slowly now, so it takes longer to hit each distance milestone. Alan makes a remarkable comment on that page: besides the spent booster that put the probe on its course to Pluto, there are no man-made objects within a billion miles of New Horizons. Space is empty, dark, and deep in the outer solar system. But only for a few more years... and then the little probe will pass Pluto, and have plenty of things to do and see. 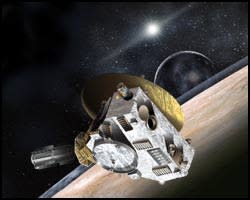