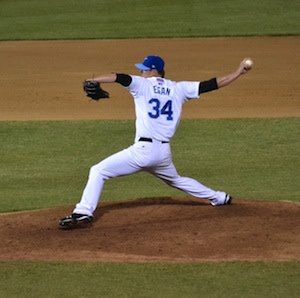 The last thing you'll ever see?

Baseball is a leisurely game---some would say achingly boring---with no ticking clock forcing the players to hurry. But what if you could speed baseball up? Way, way up, up to a relativistic pace: What would happen if the pitcher wound up and released a baseball at 90 percent the speed of light? Randall Munroe, the mind behind stick-figure comic XKCD

, has a background in physics and computer programming, which heavily influences his work. Recently he launched a new weekly feature called "What If?

" in which he answers readers’ hypothetical questions. Like how to hit a baseball

that is moving so fast, normal mechanics no longer apply and the rules of relativity come into play. The answer is that in relativistic baseball, you don’t hit the ball; the ball---or rather the plasma shockwave that the ball creates---hits you…and everyone else.

The ball is going so fast that everything else is practically stationary. Even the molecules in the air are stationary. Air molecules vibrate back and forth at a few hundred miles per hour, but the ball is moving through them at 600 million miles per hour. This means that as far as the ball is concerned, they’re just hanging there, frozen. The ideas of aerodynamics don’t apply here. Normally, air would flow around anything moving through it. But the air molecules in front of this ball don’t have time to be jostled out of the way. The ball smacks into them hard that the atoms in the air molecules actually fuse with the atoms in the ball’s surface. Each collision releases a burst of gamma rays and scattered particles.

As the gamma rays travel, they rip apart everything in their path, even air molecules, forming a sphere of super-hot plasma and x-rays that travels outward to disintegrate pitcher, batter, and the entire stadium. In fact, Munroe predicts, the devastation would form a crater where the ballpark used to be, raze all surrounding buildings to the ground, and set fire to the rest of the city. Still think baseball is too slow? For the blow-by-blow account of the baseball’s near-lightspeed journey, check out Munroe’s full answer

. And once a week, What If? will provide scientific answers to other hypothetical questions. Do you have a burning desire to know, say, what would happen if a bowl of petunias and a whale improbably appeared in space? Or your exact odds

of guessing all the multiple-choice answers and still earning perfect SAT score? Tell us your hypothetical question in the comments!