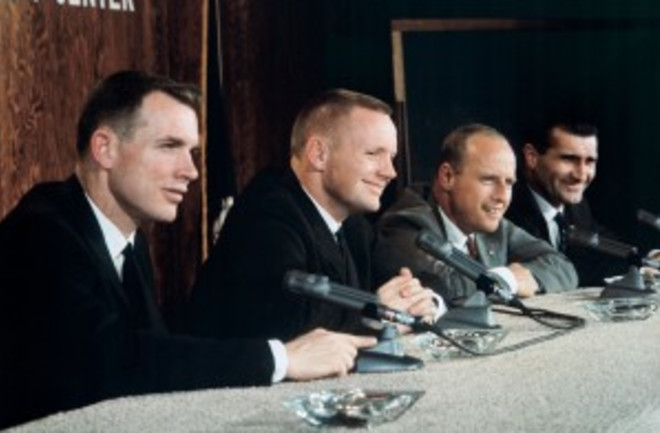 I managed to get to a preview screening of First Man this week! And as someone who has been steeped in Apollo and space history for the better part of her life (I learned about the Moon landing when I was seven and have been obsessed ever since) I have some thoughts about it… Heads up: there are spoilers.

I wanted to love this movie.

The best thing about this movie is it’s gorgeous. Without question, my favourite part was the attention to detail on the hardware. The control panels, the wear on dials, the texture on the insides of plains and spacecraft were all so beautifully done there were some shots that looked almost like the old pictures I’ve seen hundreds of times. Even the colour palette is so perfectly mid-century there are moments you feel like you’re in old NASA b-roll. I won’t totally spoil it, but the opening sequence is awesome.

Damien Chazelle use of space in capturing the tight quarters of the Gemini spacecraft brought my favourite program to life fantastically, and the violent camera motions give a sense of being inside the cramped spacecraft on a harrowing mission. There was a beautiful use of space in the Armstrong home, with shots using the hall or a doorway to frame characters in poignant moments.

The gorgeous cinematography, however, didn’t make up for what struck me as a strange lack of humanity. Which was actually my biggest concern going into this movie. Neil Armstrong’s career was incredible but he was notoriously stoic and reserved, which doesn’t always make for a riveting central character.

The Gemini 8 prime (Armstrong and Scott) and backup crew (Conrad and Gordon), displaying a sense of humour. NASA

The Gemini 8 prime (Armstrong and Scott) and backup crew (Conrad and Gordon), displaying a sense of humour. NASA

Sidebar for a personal story: I never met Neil, but he did review the first two print articles I ever wrote, one about the X-15 and one about the Dyna-Soar. When he sent me notes via my editor, they were things only an engineer would be bothered by, like my converting knots into miles per hour. This was a man who did everything by the book, an engineer through and through, and an excellent one.

The movie’s narrative is shaped around the (until now) little-known fact that Neil Armstrong (Ryan Gosling) lost his infant daughter Karen shortly before deciding to apply to NASA’s astronaut corps in 1962. This becomes the story element meant to make him a sympathetic character, his ongoing struggle with mortality seemingly at odds with his engineering brain. Only it came off like he was growing increasingly unhinged. He has visions of Karen at unexpected moments. As pilots die — Elliot See, Ted Freeman, C. C. William, Gus Grissom, Ed White, Roger Chaffee — he outwardly maintains an even strain but begins lashing out at friends and withdrawing into himself as he looks longingly at the Moon.

The emotion follows him all the way there. In a long moment of radio silence, we see a single tear fall down his cheek before he finds some form of closure by throwing Karen’s bracelet into a dark crater in a shot strikingly reminiscent of Old Rose throwing the Heart of the Ocean into the sea at the end of Titanic. His heart will go on.

It made me think: if Neil Armstrong was the kind of man to cry on the Moon, would he have been picked to go at all?

I’ve been deep in the weeds researching the development of NASA’s astronaut corps for a while now (project announcement pending) and I’ve come to the conclusion that test pilots were absolutely the right men for the job on Apollo. These were men who, bravado aside, followed mission rules to the letter. They were men who faced death in experimental planes and still maintained a clear head because they knew that clear head was the only thing keeping them from meeting death. They were the men who, coupled with exhaustive and thorough training and a constant babble over the radio, could be counted on to not completely lose their minds in the moment of realizing I’m standing on the MOON! I mean, can you imagine what seeing Earth from a quarter of a million miles away would feel like?! Because to me, it feels like anxiety. Actually, translunar EVAs get me more, but I digress…

The tear on the Moon was the climax of a sad man’s prolonged suffering, but the events leading up to the landing felt off. All the harrowing missions — Gemini 8’s roll, the LLRV crash, the Apollo1 fire — are real, but their presentation didn’t evoke emotion for me.

The LLRV — Lunar Landing Research Vehicle — was a problematic vehicle on a good day the astronauts used to train for the lunar landing. A big engine in the middle provided enough thrust to simulate the Moon’s 1/6th gravity. From there, the pilot used thrusters to land. In the movie, there’s a great shot from Neil’s point of view as he ejects and looks down at the fiery wreckage he narrowly avoided being a part of before he’s dragged across a field. The movie shows him then rushing home for a drink before returning to the office, still bloody and obviously shaken. Reports I’ve read say he bit his tongue pretty badly but was in the office an hour later writing up the report to avoid another accident.

The other one was the Apollo 1 fire. The scene in the movie shows the fire starting inside the spacecraft before switching to an external shot before we hear a sound like a muffled bomb. The Apollo 1 accident report describes that moment of rupture differently:

Flames and gases flowed rapidly out of the ruptured area, spreading flames into the toroidal space between the Command Module pressure vessel and heat shield, through access hatches and into levels A-8 and A-7 of the service structure. These flames ignited combustibles, endangered pad personnel, and impeded rescue efforts. The burst of fire, together with the sounds of rupture, caused several pad personnel to believe that the Command Module had exploded or was about to explode. Pad personnel fled from the immediate area.

Diminishing Apollo 1 felt really weird to me. But this isn’t a movie about the space race, it’s about Neil the island.

Solidifying Neil’s isolation was the absolute whirlwind of unremarkable colleagues and snippets of context. Ed White get some character development. Buzz Aldrin is there, though he’s bald and mean. Otherwise, you’d be hard-pressed to recognize anyone if you don’t know what names to be on the lookout for. Someone yelled at Pete to call Walter Cronkite at one point. Someone said Deke was on the phone. We see the astronauts’ frustration over Alexei Leonov’s spacewalk but then we skip to Gemini 5. This does the job of isolating our main character, but I did wonder how much people unfamiliar with era would be lost.

Then again, I’m a fussy historian and context is sort of my thing. But as an historian I’ve read all the Apollo mission transcripts, and the Mercury and Gemini transcripts, and I wanted to see some human Neil in the cockpit instead of the few moments home that, while touching, felt at odds with pilot Neil.

By all accounts, Neil had a dry sense of humour. The underwear incident on Apollo 11 stands out:

I asked Mike Collins about this last year and he told me this was Neil’s way of teasing him about not needing a lunar-ready, liquid-cooled undergarment. Another Apollo 11 moment stands out. On the far side of the Moon after the landing, when the crew was out of radio contact with Earth, Neil and Buzz excitedly walk Mike Collins through the samples they’d collected.

Even something as simple as his reaction on reaching orbit on Gemini 8 would have humanized him:

I couldn’t help but want to see some of that in the movie, something to make him feel more like a human and less like a Replicant. Instead, Jan Armstrong (Claire Foy) did the emoting for both of them and did it admirably.

People are going to love this movie because it is beautiful and it’s Neil Armstrong. But for me, it isn’t usurping Apollo 13 as the best space movie of all time.

So who am I? For those of you who don’t know, I’ve got a Bachelor’s in History of Science and Technology and a Master’s in Science and Technology Studies. I’ve read countless books about the era, watched hundreds of hours of archived footage, read every Apollo mission transcript and mission report and most from the Gemini and Mercury programs, too. I have a Gemini tattoo. My wall is filled with autographs from Apollo astronauts I’ve met. I even wrote a book on the prehistory of NASA.