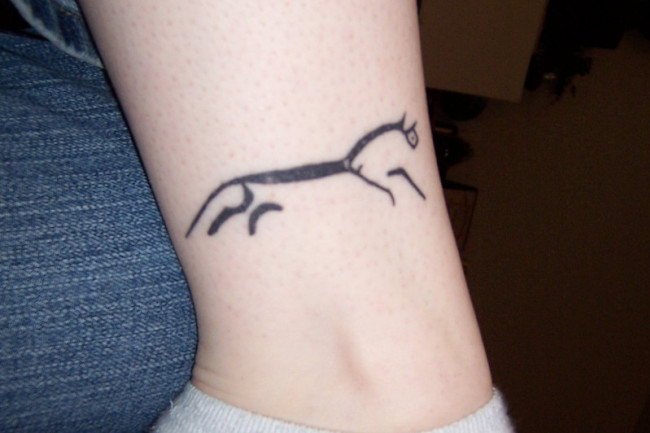 "My latest tattoo is a black-line representation of the Uffington White Horse in England. It's a huge earthwork carved into the countryside about three thousand years ago. I'm not really sure what compelled me to get it, since I'm a grad student in English and not archaeology or anthropology. But it's such a beautiful, simple design, and it represents a real feat of Bronze Age ingenuity." 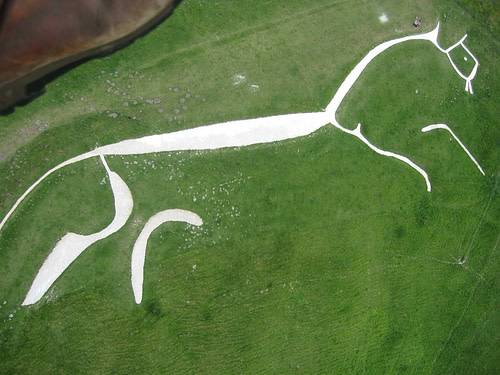 Carl: There was a time when the Uffington Horse was thought to be a dragon--in particular, the dragon slain by St. George. But in fact, it is older than dragons. The Uffington Horse is three thousand years old, we now know, because that is the last time that light struck the buried soil around the figure. Some kinds of soil and sand contain radioactive elements that break down at regular intervals. The energy they release damages the crystal structure of the soil particles, creating traps in which electrons get stuck. Sunlight striking the soil has enough energy to jostle the electrons free, and they release a tiny burst of energy. Once this soil gets buried, however, the electrons become trapped again, and the longer it is buried, the more electrons are trapped. Scientists dug up buried soil around the Uffington Horse and shined a light on it. Electrons incarcerated for three thousand years escaped, and in a flash, the horse had an age. Click here to go to the full Science Tattoo Emporium.