C'mon, Sooners! Can't you at least let this new year get a little ripe before shooting yourselves in the foot? One week into 2009, and Oklahoma lawmakers are already trying to pass antiscience legislation:

Senate Bill 320 (document), prefiled in the Oklahoma Senate and scheduled for a first reading on February 2, 2009, is apparently the first antievolution bill of 2009. Entitled the "Scientific Education and Academic Freedom Act," SB 320 would, if enacted, require state and local educational authorities to "assist teachers to find more effective ways to present the science curriculum where it addresses scientific controversies" and permit teachers to "help students understand, analyze, critique, and review in an objective manner the scientific strengths and scientific weaknesses of existing scientific theories pertinent to the course being taught." The only topics specifically mentioned as controversial are "biological evolution, the chemical origins of life, global warming, and human cloning."

Wow, what a load! I love that last line; the only "controversies" in evolution, origins of life, and global warming are those manufactured by people driven by ideology. And human cloning isn't a scientific controversy; it's a medical ethics issue. Note the name of this legislation: "The Scientific Education and Academic Freedom Act". One thing these antiscience jokers know well, and that's their Orwell. But that's the new tactic by the creationists who would have us set our clocks back a thousand years; call their methods academic freedom. Who would vote against that? Of course, this kind of freedom would allow astronomers to teach astrology, historians to teach the Earth is 6000 years old, and geologists to teach the Earth is flat. Have no doubts, this is precisely what these religious zealots want. Reality-based people of Oklahoma: make your voice heard. This act will be read on February 2. Call your local legislators, write them, make sure they understand that what they are doing is wrong. Because, if you don't:

It was a tossup between the above graphic and this one. 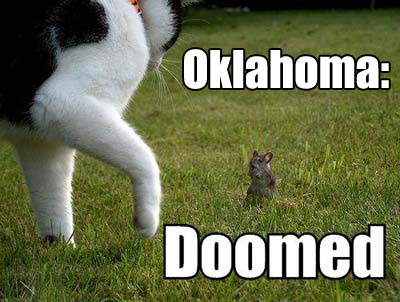