The Wild, Wonderful World of Octopuses

These boneless brainiacs play by their own rules. 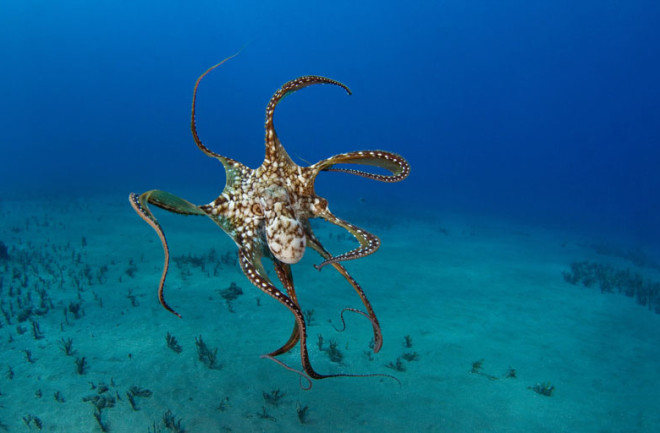 A common reef octopus (Octopus cyanea) does its thing somewhere off the coast of Hawaii. Fleetham/Naturepl.com

A Hawaiian creation myth suggests that our world emerged from the ruins of another. Everything we see was formed anew, but for one survivor from a previous age: the octopus.

Technically mollusks, with large brains that are organized in a distinctly different way from ours, octopuses may be the planet’s smartest invertebrates. Many-limbed, totally boneless and with skin color and texture that can change in a heartbeat, octopuses seem downright otherworldly. To meet one is to come as close as we can get to an intelligent alien.

Self-Editing: Octopuses can make significant changes to their RNA — the messengers that ferry instructions from DNA to cells. This ability helps them adapt to the cold, and may even play a role in why they’re so clever.

Octopia? In 2017, researchers reported that members of one octopus species lived in close proximity to each other, the first time such behavior has been documented among the famously solitary creatures. The octopuses apparently gathered to exploit ample food resources: scallops. So numerous were the emptied and discarded scallop shells that they could be mistaken for mini-cities on the ocean floor. But it was no utopia — evictions by larger octopuses were common.

Tasty! Octopus arms are muscular and boneless; the best human analog would be the tongue, and the comparison is especially apt. The hundreds of suckers that line each of the arms are covered in chemoreceptors similar to our own taste buds — octopuses can “taste” everything they touch. The ability is likely what allows them to recognize their own arms and prevent them from getting stuck together.

It Takes Brains Not to Tangle: Octopus arms are filled with neurons. In fact, more brain cells reside in their eight arms than in their entire brain. Their bodies are so complex, argues one researcher, that they need significant brainpower just to control their endlessly malleable limbs.

Hide in Plain Sight: An octopus can become a strand of seaweed or a rock pile, or melt seamlessly into the sand within seconds. They’re masters of disguise, thanks to sacs of pigment in their skin controlled by muscles, as well as cells that reflect and scatter light.

Squishiness: Being boneless has its advantages. Because they can rearrange their bodies into almost any shape, large octopuses have been known to squeeze through openings of just a few inches. Any space larger than their beak — one of the only hard parts of an octopus — is fair game.

Humble Beginnings: The last common ancestor we shared with octopuses lived over 500 million years ago, and probably looked something like a worm. Although octopus fossils are rare (because the animals lack bones), their lineage goes back at least 300 million years, meaning they predate dinosaurs.

Ranging Far and Wide: Octopuses have adapted to a broad range of ocean environments, from coral reefs to the deep sea, and from equatorial waters to Antarctica and the Gulf of Alaska.

Friendly-Looking Flapjack Some octopuses are downright cute, like this deepwater species, about the size of a baseball, found in California's Monterey Bay. Researcher Stephanie Bush proposes a fitting moniker for the still-unnamed species of flapjack octopus: Opisthoteuthis adorabilis.

Helicopter Parenting Dedicated octopus moms stop eating after their eggs are fertilized; they simply stand guard until the eggs hatch. The process normally takes a few months, but one species endures a much longer vigil. One Graneledone boreopacifica octopus was observed with her eggs for 53 months — about four and a half years — making it by far the longest recorded brooding period of any animal.

Inky’s Great Escape Octopuses are known to be smart and slippery creatures, but Inky, a former resident of a New Zealand aquarium, is downright legendary. The common New Zealand octopus managed to pick apart the lid of his tank in the middle of the night, crawl out and escape down a drain hole that led to the sea. He was never seen again.

Master of Disguise One minute it’s a flatfish, the next a sea snake — shape-shifting Thaumoctopus mimicus, the mimic octopus, also can impersonate sea anemones, jellyfish and lionfish. Although octopus camouflage usually involves just the skin, the mimic octopus has learned to copy a range of motions from other species. It raises and curls its arms like a sea snake or undulates like a flounder, likely defenses against predators.

Not Easy as Pi

One octopus, two octopi? That spelling is actually incorrect because it’s based on Latin grammar. The word octopus is derived from ancient Greek, so the proper plural is octopodes. If that’s a bit too formal, octopuses is also acceptable.