It's a big universe out there -- maybe bigger that we think. A lot of people these days are contemplating the possibility that the wider world isn't just more of the same; it could be that there are regions very different from ours, even with different low-energy laws of physics, outside our observable universe. It's an old idea, which we now label the "multiverse," even though we're talking about regions of space connected to ours. A lot of other people are aghast that this is considered science. Personally I think science talks about unobservable things all the time, and this question is going to be resolved by people doing hard work to make sense of multiverse scenarios rather than by pronouncements about what is or is not science. 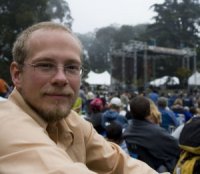 We're very happy to have a guest post from one of the people who is doing exactly that hard work -- Matt Johnson, who guest-blogged for us before. He and his collaborators just come out two papers that examine the cosmic microwave background, looking for evidence of "bubble collisions."

The hope is that these other "universes" might not be completely separate from our own -- maybe we collided in the past. They've done a very careful job going through the data, with intriguing but inconclusive results. (See also Backreaction.) Looking for this kind of signature in the CMB is certainly reminiscent of the concentric circles predicted by Gurzadyan and Penrose. But despite the similarities, it's different in crucial ways -- different theory, different phenomenon leading to the signal, different analysis, different conclusions. The road to sorting out this multiverse stuff is long and treacherous, but our brave cosmological explorers will eventually guide us through. Here's Matt. ----------------------------------------------------------------------- Observing other universes: is this science fiction? Perhaps not. Stephen Feeney, Daniel Mortlock, Hiranya Peiris and I recently performed an observational search for the signatures of colliding bubble universes in the cosmic microwave background. Before getting to our results, let me explain some of the back-story. The idea that there might be other universes is taken quite seriously in high energy physics and cosmology these days. This is mainly due to the fact that the laws of physics, and the various ``fundamental" constants appearing in them, could have been otherwise. More technically worded, there is no unique vacuum in theories of high energy physics that involve spontaneous symmetry breaking, extra dimensions, or supersymmetry. Having a bunch of vacua around is interesting, but to what extent are they actually realized in nature? Surprisingly, when a spacetime region undergoing inflation is metastable, there are cases when all of the vacua in a theory can be realized in different places and at different times. This phenomenon is known as eternal inflation. In an inflating universe, if a region is in a metastable vacuum, bubbles containing different vacua will form. These bubbles then expand, and eat into the original vacuum. However, if the space between bubbles is expanding fast enough, they never merge completely. There is always more volume to convert into different vacua through bubble formation, and the original vacuum never disappears: inflation becomes eternal. In the theory of eternal inflation, our entire observable universe resides inside one of these bubbles. Other bubbles will contain other universes. In this precise sense, many theories of high energy physics seem to predict the existence of other universes. In the past four years, a few groups have tried to understand if it is possible to confront this radical picture of a ``multiverse" with observation. The idea is to look for signatures of a collision between another bubble universe and our own. Even though the outside eternally inflating spacetime prevents all bubbles from merging, there will be many collisions between bubbles. How many we are even in principle able to see depends in detail on the underlying theory, and given the proliferation of theories, there is no concrete prediction. Currently, the best information about the primordial universe comes from the cosmic microwave background (CMB). A collision will produce inhomogeneities in the early stages of cosmology inside our bubble, which are then imprinted as temperature and polarization fluctuations of the CMB. One can look for these fingerprints of a bubble collision in data from the WMAP or Planck satellites. Most of the previous work has been to establish a proof of concept that observable bubble collisions can exist, and that there are theories which predict that we expect to see them; many of the details remain to be worked out. There are however a number of generic signatures of bubble collisions that we used to guide our search. Since a collision affects only a portion of our bubble interior, and because the colliding bubbles are nearly spherical, the signal is confined to a disc on the CMB sky (imagine two merging soap bubbles; the intersection is a ring). The effect of the collision inside the disc is very broad because it has been stretched by inflation. In addition, there might be a jump in the temperature at the boundary of the disc (although the magnitude and sharpness of such a jump has yet to be worked out in detail). In a pair of papers (summary: arXiv:1012.1995 , details: arXiv:1012.3667) with Stephen Feeney, Daniel Mortlock, and Hiranya Peiris, we performed a search for these types of generic signatures in CMB data from the WMAP satellite. Our philosophy was to define a phenomenological model that encompasses the generic signatures of bubble collisions, and use the data to constrain the free parameters in the model. See the picture shown below, which is a simulated CMB sky containing a bubble collision, for an example of what a very clear signal might look like.

Predicted signal on the cosmic microwave background from a simulated collision with a bubble from another "universe." 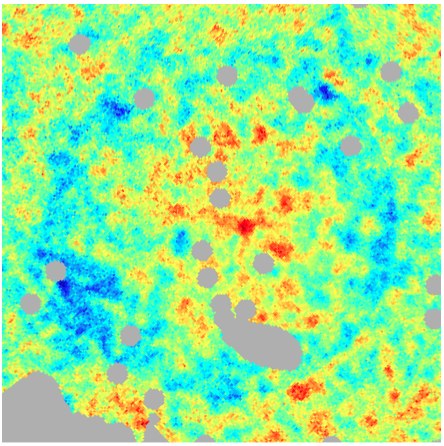 Zoomed in on the simulated bubble from above.

Cutting to the chase, we were first able to use simulated CMB data containing bubble collisions to rule out a range of parameter space as inconsistent with WMAP data. As it turned out, the existence of a temperature discontinuity at the boundary of the disc greatly increases our ability to make a detection. We did not find any circular temperature discontinuities in the WMAP data. While we didn't make any clear detections of bubble collisions, we did find four features in the WMAP data that are better explained by the bubble collision hypothesis than by the standard hypothesis of fluctuations in a nearly Gaussian field. We assess which of the two models better explain the data by evaluating the Bayesian evidence for each. The evidence correctly accounts for the fact that a more complex model (the bubble collisions, in this case) will generally fit the data better simply because it has more free parameters. This is the self-consistent statistical equivalent of applying Ockham's Razor. In addition, using information from multiple frequencies measured by the WMAP satellite and a simulation of the WMAP experiment, we didn't find any evidence that these features can be attributed to astrophysical foregrounds or experimental systematics. One of the features we identified is the famous Cold Spot, which has been claimed as evidence for a number of theories including textures, voids, primordial inhomogeneities, and various other candidates. A nice aspect of our approach is that it can be used to compare these hypotheses, without making arbitrary choices about which features in the CMB need explaining (focusing on the Cold Spot is an a posteriori choice). We haven't done this yet, but plan to soon. While identifying the four features consistent with being bubble collisions was an exciting result, these features are on the edge of our sensitivity thresholds, and so should be considered only as a hint that there might be bubble collisions to find in future data. The good news is that we can do much more with data from the Planck satellite, which has better resolution and lower noise than the WMAP experiment. There is also much better polarization information, which provides a complementary signal of bubble collisions (found by Czech et. al. - arXiv:1006.0832). We'll be gearing up to analyze this data, and hopefully there will be more to the story then.