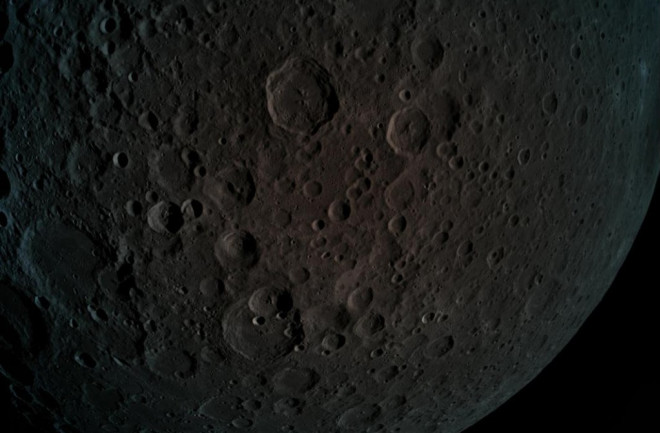 Beresheet sent back its first pictures of the Moon’s far side yesterday after it was captured into lunar orbit. (Credit: Eliran Avital) The scrappy Israeli Beresheet mission successfully entered lunar orbit on April 4, joining a select club of nations and agencies that have ever circled the moon. This morning, SpaceIL and Israel Aerospace Industries (IAI), who built and operate the spacecraft, released its first close-up pictures of the moon’s mysterious far side. And next week, on April 11, Beresheet will make its most daring maneuver as it attempts to land on the lunar surface.

In one of its recent pictures, Beresheet captured Earth hanging behind the moon’s far side. (Credit: Eliran Avital) Beresheet lifted off from Earth February 22 on a Falcon 9 rocket and has spent most of that time circling Earth, slowly increasing its orbit through a series engine burns to lift it higher and farther from our planet. It's a much longer trip than most spacecraft take, but it's proven to be an innovative approach for the physically and financially tiny mission, which cost only about $100 million and weighs less than 300 pounds. Yesterday, Beresheet successfully entered a lunar capture orbit, where it will stay for roughly a week. During that time, the spacecraft will be documenting its stay, and it's already sent back pictures of the lunar far side, including an image with Earth in the background. Mission managers plan for it to touch down in Mare Serenitatis next week. It's a smooth area on the moon’s near side. And the location sits just about 100 miles from both the landing site of Apollo 15 and Apollo 17. Because Beresheet is a spacecraft on a budget, it doesn’t carry any means of regulating its temperature. Engineers expect it to last for two to three days on the surface before it overheats under the sun’s rays in the moon’s thin atmosphere. Engineers hope to receive photos and even video of the landing, which should be a visual treat. If it succeeds, Beresheet will make Israel only the fourth nation (after Russia, the United States and China) to achieve a soft landing on the moon’s surface, and the only one who is not a global superpower.