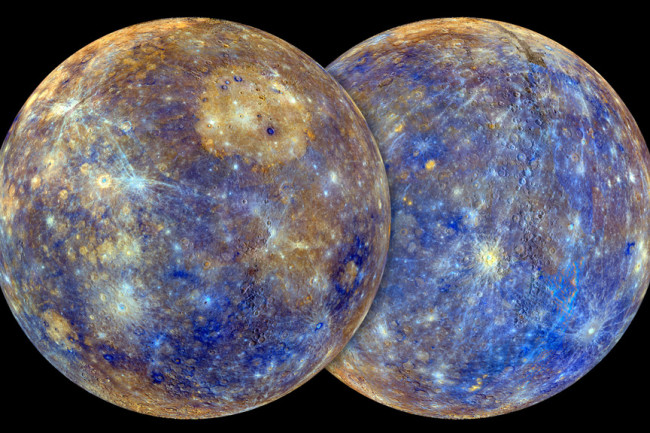 A mosaic of images from the Messenger spacecraft show the entire surface of Mercury. (Image: NASA's Goddard Space Flight Center) I know, this is supposed to be a blog about planet Earth, not our neighbors in the solar system. But when a Facebook friend posted these images of Mercury to her wall, I thought they were so beautiful that I just had to share them. The images show both sides of Mercury, and 100% of the surface. Scientists made them by stitching together thousands of individual images from the Messenger spacecraft, which, in a first, has been orbiting the planet since March 18, 2011. So far, the spacecraft has taken more than 160,000 images. Now in an extended mission mode, it is still going. And going... The pockmarked surface of Mercury is testament to bombardment by meteors, with younger craters showing up as light blue or whitish. Lava flows are evident in the tan regions. For more information, as well as visualizations, check out NASA's Visualization Explorer.