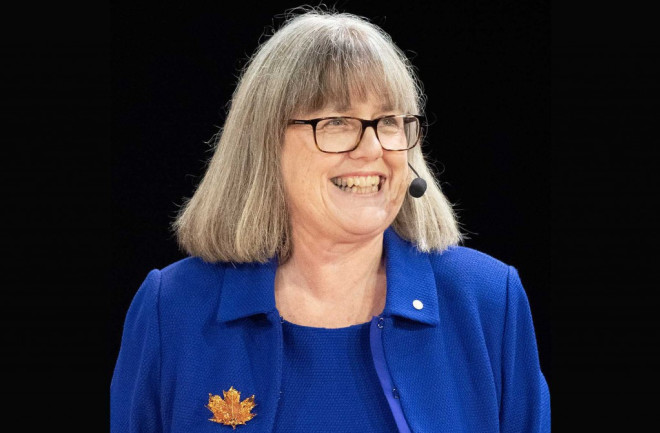 Donna Stickland was awarded the Nobel Prize in Physics in December 2018 in Stockholm, Sweden. Her work "paved the way toward the most intense laser pulses ever created." (Credit: Bengt Nyman/Wikimedia Commons)

Since the announcement that I won the Nobel Prize in physics for chirped pulse amplification, or CPA, there has been a lot of attention on its practical applications.

It is understandable that people want to know how it affects them. But as a scientist, I would hope society would be equally interested in fundamental science. After all, you can’t have the applications without the curiosity-driven research behind it. Learning more about science — science for science’s sake — is worth supporting.

Gérard Mourou, my co-recipient of the Nobel Prize, and I developed CPA in the mid-1980s. It all started when he wondered if we could increase laser intensity by orders of magnitude — or by factors of a thousand. He was my doctoral supervisor at the University of Rochester back then. Mourou suggested stretching an ultrashort pulse of light of low energy, amplifying it and then compressing it. As the graduate student, I had to handle the details.

The goal was to revolutionize the field of high-intensity laser physics, a fundamental area of science. We wanted the laser to show us how high-intensity light changes matter, and how matter affects light in this interaction.

Noble Prize winner Donna Strickland in her lab at the University of Waterloo. She was awarded the prize for her groundbreaking inventions in the field of laser physics which has a variety of applications, including corrective laser eye surgery. (Credit: THE CANADIAN PRESS/Nathan Denette)

It took me a year to build the laser. We proved that we could increase laser intensity by orders of magnitude. In fact, CPA led to the most intense laser pulses ever recorded. Our findings changed the world’s understanding of how atoms interact with high-intensity light.

It was about a decade before practical uses common today eventually came into view.

Because the high-intensity pulses are short, the laser only damages the area where it’s applied. The result is precise, clean cuts that are ideal for transparent materials. A surgeon can use CPA to slice a patient’s cornea during laser eye surgery. It cleanly cuts the glass parts in our cell phones.

Scientists are taking what we know about high-intensity lasers and are working on a way to use the most intense CPA lasers to accelerate protons.

Hopefully, one day these accelerated particles will help surgeons remove brain tumors that they can’t today. In the future, CPA lasers might remove space junk by pushing it out of our orbit and to the Earth’s atmosphere, where it will burn up and not collide with active satellites.

In many cases, the practical applications lag several years or even decades behind the original findings.

Albert Einstein created the equations for the laser in 1917, but wasn’t until 1960 that Theodore Maiman first demonstrated the laser. Isidor Rabi first measured nuclear magnetic resonance in 1938. He received the Nobel Prize for Physics in 1944 for his research, which led to the invention of magnetic resonance imaging, or MRI. The first MRI exam on a human patient took place in 1977.

Certainly, applications deserve a lot of attention. Before you can get to them though, researchers first have to understand the basic questions behind them.

The term fundamental science may give some the false impression that it doesn’t really affect their lives because it seems far removed from anything relatable to them. What’s more, the term basic has the non-scientific definition of simple that undermines its importance in the context of basic science.

We must give scientists the opportunity through funding and time to pursue curiosity-based, long-term, basic-science research. Work that does not have direct ramifications for industry or our economy is also worthy. There’s no telling what can come from supporting a curious mind trying to discover something new.