There's sure been a lot of hullabaloo over Al Gore's Nobel Peace Prize. For an interesting perspective, take a gander over at nanopublic where you'll find lots of thought-provoking links to explore. 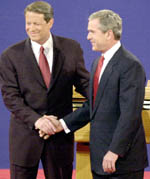 "Meanwhile, European media are gloating about "a public slap in the face" for President Bush by the Norwegian Nobel Committee and "the inconvenient truth for the current administration" that the prize has "brought to light." What's interesting, of course (and maybe a bad form of karma), is that George H. W. Bush, father of the current U.S. President, ridiculed Al Gore as "Ozone Man" during the 1992 Presidential race with Bill Clinton." No doubt Dietram jests, but I think I may like the 'What goes around comes around' theory. Peace Prize committee chairman Ole Danbolt Mjoes:

I'm curious whether readers agree with the way it appears that the European media is framing the Nobel win as Bush vs Gore...