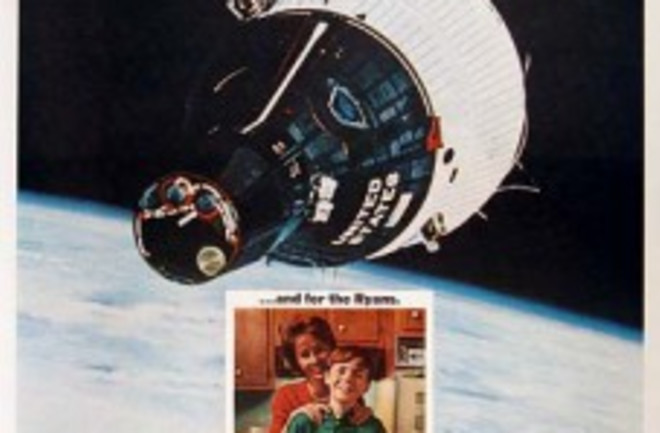 A Tang ad using a Gemini image. via General Foods/Kraft.

Tang, the orange flavoured breakfast drink, is so synonymous with NASA that people seem to think the space agency invented it. Even Homer Simpson somehow called up NASA to demand why he couldn't get "no Tang 'round here!" But contrary to popular belief NASA didn't invent Tang. That honour goes to William Mitchell, the guy who also invented Pop Rocks and Cool Whip.

The short version of the story is that Charles William “C. W.” Post went to the Battle Creek Sanitarium in the early 1890s. At the time the sanitarium was managed by the Kellog brothers, John Harvey and William Keith, who'd developed a dry cereal for their patients as well as Postum, a caffeine-free beverage Post preferred to coffee. Inspired, Post founded the Postum Cereal Co. in 1895, and after his suicide in 1914 and a series of corporate deals, the company became the General Foods Corporation in 1929. In 1941, General Foods hired chemist Dr. William A. Mitchell, and Mitchell came up with Tang.

Tang hit the market in 1957 after 2 years of research and development. It was marketed as a breakfast drink packed with vitamin C, vitamin A, calcium, and vitamin E available in a convenient easy to mix powder. Before long, ready to drink Tang in 7-ounce and 14-ounce glass jars reached grocery stores. It wasn't a great seller in the US, though it did expand to foreign markets hitting shelves in Venezuela and Western Germany.

Sales remained poor until 1962 when the world watched John Glenn drink “orange drink” out of a pouch. It never said Tang, but NASA saw this ready-to-drink travel beverage and realized that’s how it ought to be packaging drinks for astronauts so bought something conveniently commercially available. Suddenly Tang was the space age treat moms could bring home for their kids, and sales skyrocketed. And Tang also rocketed, quite literally. In 1965, Gemini astronauts brought Tang along on their missions, and around the same time footage started appearing in Tang commercials and NASA images appeared in print ads. The relationship continued into the Apollo program with Tang sponsoring TV coverage of Apollo 8, the first manned mission to the Moon.

In 1969, Tang launched its “For Spacemen and Earth Families” ad campaign, cementing the public's association of Tang with NASA and particularly the lunar landing program. And perpetuating the belief that NASA invented it.

Want more Vintage Tang ads, including the full ones I used clips of in my video? Check them out below. They're actually pretty phenomenal!

*This is an updated version of an old blog post that I wanted to turn into a video finally! The original is here. Additional sources: Tang.