Newsflash: Time May Not Exist

Not to mention the question of which way it goes ... 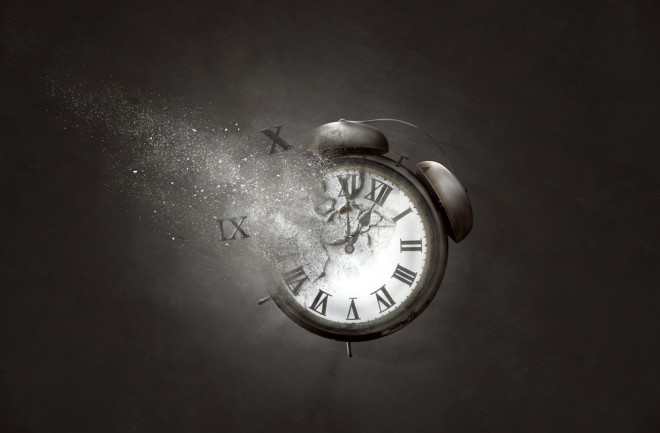 No one keeps track of time better than Ferenc Krausz. In his lab at the Max Planck Institute of Quantum Optics in Garching, Germany, he has clocked the shortest time intervals ever observed. Krausz uses ultraviolet laser pulses to track the absurdly brief quantum leaps of electrons within atoms. The events he probes last for about 100 attoseconds, or 100 quintillionths of a second. For a little perspective, 100 attoseconds is to one second as a second is to 300 million years.

But even Krausz works far from the frontier of time. There is a temporal realm called the Planck scale, where even attoseconds drag by like eons. It marks the edge of known physics, a region where distances and intervals are so short that the very concepts of time and space start to break down. Planck time — the smallest unit of time that has any physical meaning — is 10-43 second, less than a trillionth of a trillionth of an attosecond. Beyond that? Tempus incognito. At least for now.

Efforts to understand time below the Planck scale have led to an exceedingly strange juncture in physics. The problem, in brief, is that time may not exist at the most fundamental level of physical reality. If so, then what is time? And why is it so obviously and tyrannically omnipresent in our own experience? “The meaning of time has become terribly problematic in contemporary physics,” says Simon Saunders, a philosopher of physics at the University of Oxford. “The situation is so uncomfortable that by far the best thing to do is declare oneself an agnostic.”

The trouble with time started a century ago, when Einstein’s special and general theories of relativity demolished the idea of time as a universal constant. One consequence is that the past, present, and future are not absolutes. Einstein’s theories also opened a rift in physics because the rules of general relativity (which describe gravity and the large-scale structure of the cosmos) seem incompatible with those of quantum physics (which govern the realm of the tiny). Some four decades ago, the renowned physicist John Wheeler, then at Princeton, and the late Bryce DeWitt, then at the University of North Carolina, developed an extraordinary equation that provides a possible framework for unifying relativity and quantum mechanics. But the Wheeler-DeWitt equation has always been controversial, in part because it adds yet another, even more baffling twist to our understanding of time.

“One finds that time just disappears from the Wheeler-DeWitt equation,” says Carlo Rovelli, a physicist at the University of the Mediterranean in Marseille, France. “It is an issue that many theorists have puzzled about. It may be that the best way to think about quantum reality is to give up the notion of time — that the fundamental description of the universe must be timeless.”

No one has yet succeeded in using the Wheeler-DeWitt equation to integrate quantum theory with general relativity. Nevertheless, a sizable minority of physicists, Rovelli included, believe that any successful merger of the two great masterpieces of 20th-century physics will inevitably describe a universe in which, ultimately, there is no time.

The possibility that time may not exist is known among physicists as the “problem of time.” It may be the biggest, but it is far from the only temporal conundrum. Vying for second place is this strange fact: The laws of physics don’t explain why time always points to the future. All the laws—whether Newton’s, Einstein’s, or the quirky quantum rules — would work equally well if time ran backward. As far as we can tell, though, time is a one-way process; it never reverses, even though no laws restrict it.

“It’s quite mysterious why we have such an obvious arrow of time,” says Seth Lloyd, a quantum mechanical engineer at MIT. (When I ask him what time it is, he answers, “Beats me. Are we done?”) “The usual explanation of this is that in order to specify what happens to a system, you not only have to specify the physical laws, but you have to specify some initial or final condition.”

The mother of all initial conditions, Lloyd says, was the Big Bang. Physicists believe that the universe started as a very simple, extremely compact ball of energy. Although the laws of physics themselves don’t provide for an arrow of time, the ongoing expansion of the universe does. As the universe expands, it becomes ever more complex and disorderly. The growing disorder — physicists call it an increase in entropy — is driven by the expansion of the universe, which may be the origin of what we think of as the ceaseless forward march of time.

Time, in this view, is not something that exists apart from the universe. There is no clock ticking outside the cosmos. Most of us tend to think of time the way Newton did: “Absolute, true and mathematical time, of itself, and from its own nature, flows equably, without regard to anything external.” But as Einstein proved, time is part of the fabric of the universe. Contrary to what Newton believed, our ordinary clocks don’t measure something that’s independent of the universe. In fact, says Lloyd, clocks don’t really measure time at all.

“I recently went to the National Institute of Standards and Technology in Boulder,” says Lloyd. (NIST is the government lab that houses the atomic clock that standardizes time for the nation.) “I said something like, ‘Your clocks measure time very accurately.’ They told me, ‘Our clocks do not measure time.’ I thought, Wow, that’s very humble of these guys. But they said, ‘No, time is defined to be what our clocks measure.’ Which is true. They define the time standards for the globe: Time is defined by the number of clicks of their clocks.”

Rovelli, the advocate of a timeless universe, says the NIST timekeepers have it right. Moreover, their point of view is consistent with the Wheeler-DeWitt equation. “We never really see time,” he says. “We see only clocks. If you say this object moves, what you really mean is that this object is here when the hand of your clock is here, and so on. We say we measure time with clocks, but we see only the hands of the clocks, not time itself. And the hands of a clock are a physical variable like any other. So in a sense we cheat because what we really observe are physical variables as a function of other physical variables, but we represent that as if everything is evolving in time.

“What happens with the Wheeler-DeWitt equation is that we have to stop playing this game. Instead of introducing this fictitious variable — time, which itself is not observable — we should just describe how the variables are related to one another. The question is, Is time a fundamental property of reality or just the macroscopic appearance of things? I would say it’s only a macroscopic effect. It’s something that emerges only for big things.”

By “big things,” Rovelli means anything that exists much above the mysterious Planck scale. As of now there is no physical theory that completely describes what the universe is like below the Planck scale. One possibility is that if physicists ever manage to unify quantum theory and general relativity, space and time will be described by some modified version of quantum mechanics. In such a theory, space and time would no longer be smooth and continuous. Rather, they would consist of discrete fragments — quanta, in the argot of physics — just as light is composed of individual bundles of energy called photons. These would be the building blocks of space and time. It’s not easy to imagine space and time being made of something else. Where would the components of space and time exist, if not in space and time?

The problem, in brief, is that time may not exist at the most fundamental level of physical reality.

As Rovelli explains it, in quantum mechanics all particles of matter and energy can also be described as waves. And waves have an unusual property: An infinite number of them can exist in the same location. If time and space are one day shown to consist of quanta, the quanta could all exist piled together in a single dimensionless point. “Space and time in some sense melt in this picture,” says Rovelli. “There is no space anymore. There are just quanta kind of living on top of one another without being immersed in a space.”

Rovelli has been working with one of the world’s leading mathematicians, Alain Connes of the College of France in Paris, on this notion. Together they have developed a framework to show how the thing we experience as time might emerge from a more fundamental, timeless reality. As Rovelli describes it, “Time may be an approximate concept that emerges at large scales — a bit like the concept of ‘surface of the water,’ which makes sense macroscopically but which loses a precise sense at the level of the atoms.”

Realizing that his explanation may only be deepening the mystery of time, Rovelli says that much of the knowledge that we now take for granted was once considered equally perplexing. “I realize that the picture is not intuitive. But this is what fundamental physics is about: finding new ways of thinking about the world and proposing them and seeing if they work. I think that when Galileo said that the Earth was spinning crazily around, it was utterly incomprehensible in the same manner. Space for Copernicus was not the same as space for Newton, and space for Newton was not the same as space for Einstein. We always learn a little bit more.”

Einstein, for one, found solace in his revolutionary sense of time. In March 1955, when his lifelong friend Michele Besso died, he wrote a letter consoling Besso’s family: “Now he has departed from this strange world a little ahead of me. That means nothing. People like us, who believe in physics, know that the distinction between past, present, and future is only a stubbornly persistent illusion.”

Rovelli senses another temporal breakthrough just around the corner. “Einstein’s 1905 paper came out and suddenly changed people’s thinking about space-time. We’re again in the middle of something like that,” he says. When the dust settles, time — whatever it may be — could turn out to be even stranger and more illusory than even Einstein could imagine.