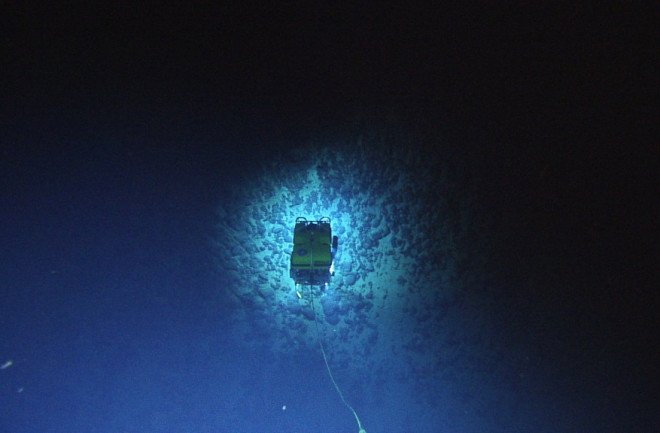 The ROV Hercules passes over a field of basaltic rocks on the San Juan Seamount. (Image: Ocean Exploration Trust)

The following is one article in a series of dispatches from the E/V Nautilus. I am serving as a participating scientist on the Central California leg of the 2016 expedition; live footage of our exploration on the seafloor can be found at www.nautiluslive.org.

About two million years ago, a small archipelago off the coast of modern-day California slipped beneath the waves, receding into the ocean. Its birth had been a violent one, as volcanic eruptions piled basalt upward, pyramid-like, through the deep sea and toward the light. Ultimately, the water line was breached and mountainous islands rose into the air. Waves smashed against the rocks, creating black sand beaches, and rivers coursed through what was no doubt a verdant landscape. But then the land started sinking. With an empty magma chamber and a cooling, contracting crustal base, the cliffs became beaches, and ultimately disappeared entirely. Over the last couple of days, the Exploration Vessel Nautilus and its attendant remotely operated vehicle Hercules have (via a suite a cameras and a fiber optic cable) laid eyes on the unexplored areas of this ancient volcano for the first time. The enormous construction, known as the Sea Juan Seamount, is about 70 kilometers long, 30 kilometers wide, and 3 kilometers tall, cresting several hundred meters beneath modern-day sea level. San Juan is one of several seamounts along the California coast, fed by long-extinct magma chambers along SW-NE trending spreading centers. Those that were emplaced on the relatively shallow, flat continental margin (like Rodriguez and Northeast Bank Seamounts) have well established paleo-island characteristics, while those further afield (including Davidson and San Marcos Seamounts) probably never eclipsed the sea surface. San Juan is right on the margin’s edge, so evidence of subaerial features was a little surprising. The telltale flat-topped shape of a submerged volcano, which forms thanks to a more punishing erosion regime above water that cuts the topography down to size, was not immediately evident through bathymetric mapping. But distinct types of lava flows and rounded rocks indicative of wave-induced erosion told a different story, suggesting a minimum island elevation of 180 meters. Just how much of the San Juan seamount was once above water remains uncertain; with Hercules, we hoped to provide some clarification. The other objective was to survey the biological trends moving up the seamount. “Not much has been reported on the transition zones from one assemblage of animals to another,” explains Nautilus Expedition Leader Nicole Raineault. “We’re hoping to see how these communities change with slope and depth.” The ascent was a long, slow effort, with Hercules traversing nearly three vertical kilometers up San Juan’s southeastern slope. At the base, the soft brown seafloor gave way to jumbled piles of pillow basalt, so named for the bulbous shapes that form when lava erupts underwater. A circular depression at 2000 meters depth was filled with fine tan sediment, a potential flanking crater that may have once provided a gurgling sideshow to San Juan’s upward climb. Enormous, near-vertical cliffs materialized, populated by squat lobsters, grenadier fish, cusk eels, and translucent tunicates. Hercules topped out at 750 meters depth and was greeted by an underwater garden of helix-curled whip corals, highlighter yellow Staurocalyptus sponges, and trumpet sponges. Diagnostic signs of island conditions, like bedded sandstones or rock conglomerates comprised of rounded pebbles, proved elusive, suggesting that our top horizon of roughly 200 meters below the seamount’s summit was not above water, at least not for very long. This observational constraint will help scientists reconstruct the timeline and extent of San Juan’s emergence and subsidence, piecing together southern California's tectonic jumble. But the biological overprint on this geological conundrum was a revelation. “These seamounts are oases of the deep,” says Raineault. “Getting to see the ecology and the zonation of San Juan was really helpful in starting to understand how these features work and how important they may be as hotspots of biodiversity.”