New Study Says that Dark Energy Could be Growing in Strength 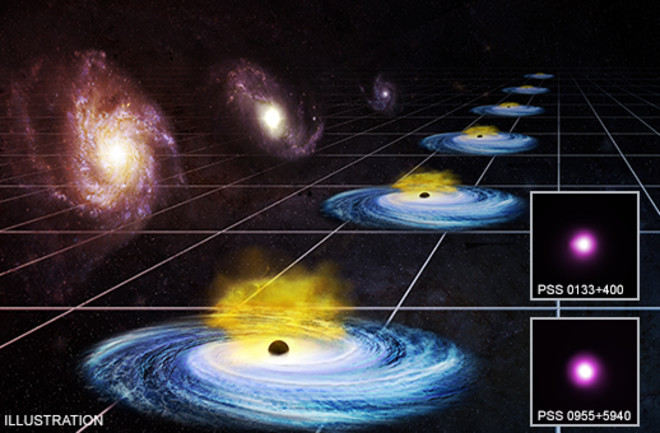 An illustration of quasars stretching farther and farther away from Earth. In one new study, researchers have found evidence to support the idea that dark energy may be growing with time. (Credit: Illustration: NASA/CXC/M.Weiss; X-ray: NASA/CXC/Univ. of Florence/G.Risaliti & E.Lusso)

Dark energy, the mysterious and hypothetical force that scientists think is causing the expansion of the universe to accelerate, may actually be growing over time, according to one new study.

Whatever it is, dark energy seems to be pushing things in the universe apart from each other.

“If the universe contained only mass, it could only decelerate as a consequence of the gravitational braking. The acceleration implies the existence of a repulsive force, which is what we call ‘dark energy,'” paper co-author Guido Risalti of the University of Florence said in an email. And so, while the existence of the mysterious force hasn’t yet been confirmed, scientists watch its effects by studying the expansion of the universe.

With this new study, researchers Risalti and Elisabeta Lusso of Durham University used data from NASA’s Chandra X-ray Observatory and the ESA’s XMM-Newton space observatory to track the expansion of the universe from about 13 billion years ago to today. This allowed the researchers to track how the universe’s expansion rate, and therefore dark energy, has changed over time.

To track the expansion of the universe, the team used ultraviolet (UV) and X-ray data to estimate the distances of 1,598 quasars — extremely bright, faraway active galactic nuclei — to Earth.

By observing and studying UV and X-ray data from these quasars, the team was able to figure out their luminosity.

“From the luminosity, we can infer the distance [from Earth], and distances are what we need to track the expansion of the Universe,” Risalti explained. With the distances of all 1,598 quasars calculated, the researchers were able to track the universe’s expansion rate back through time. And, with their findings, the team found evidence that dark energy seems to be getting denser over time, which would mean it’s growing in strength.

Now, especially since the existence of dark energy hasn’t yet been confirmed, these researchers do make clear that it’s just one explanation for their findings.

“I am not certain at all,” Risalti said of whether expanding dark energy is a certainty. “It is a possible extension of the standard model, but it is a long way to saying this interpretation is unique or is the best one.”

However, if the team’s findings are confirmed, it could imply that the universe might expand more quickly in the future, Risalti explained.

“If we ‘select’ this interpretation, it means that the density, and so the importance, of dark energy will increase with time, and so the universe will expand more and more rapidly in the future,” Risalti said.  This new study is reported in the latest issue of Nature Astronomy. A preprint is available on the arXiv.