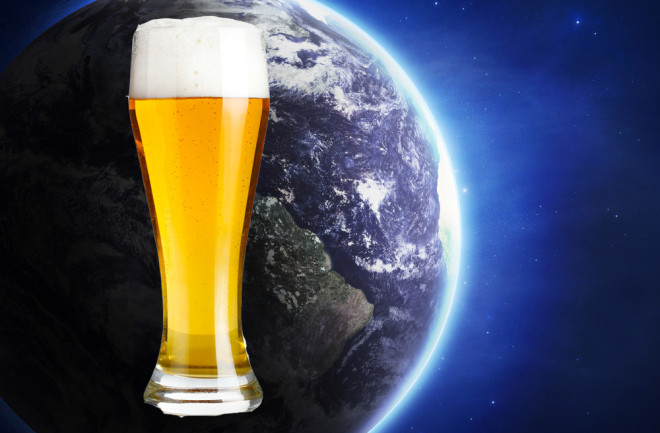 How about a pint of this extraterrestri-ale? Credit Vadim Sadovski/Serhiy Shullye/Shutterstock It’s one thing to love astronomy so much that you live and breathe the stuff. But how about actually drinking it? Now, thanks to the Dogfish Head Brewery in Delaware, you can even do that. The brewpub is offering, for a limited time, a special Celest-jewel-ale, made with actual moon bits, according to their website:

Celest-jewel-ale is made with lunar meteorites that have been crushed into dust, then steeped like tea in a rich, malty Oktoberfest. These certified moon jewels are made up primarily of minerals and salts, helping the yeast-induced fermentation process and lending this traditional German style a subtle but complex earthiness. (Or is it mooniness?) … We also used German malts and hops, and fermented this beer with our house Doggie yeast, giving Celest-jewel-ale notes of doughy malt, toasted bread, subtle caramel and a light herbal bitterness.

Bits of meteorite used by Dogfish to create the new beer. Courtesy Dogfish Head They apparently got the meteorites (which are more numerous than you might think) for the alien ale from their “friends up the road at ILC Dover,” a company that makes space suits for astronauts. They’ve also kicked in 10 beer koozies made from the same material, Orthofabric. As Gizmodo writes,

should it somehow become possible to down a few brews in the vacuum of space, these little koozies will do just fine withstanding everything from+250/-250F temperatures to micrometeroids going 10 miles per second to solar radiation. So yes, that Orthofabric will keep your beer very cold.

The Celest-jewel-ale is only available at the Dogfish Head’s Rehoboth Beach location, and you’d need to leave your license and drink at the bar to enjoy the space-tech koozie. It’s a small price to pay for the ultimate space fan to imbibe a piece of the sky. Plus: Hey, it's beer. (Maybe we should get some at the Discover offices, to properly report this important story?) That’s one small step for beer, one giant leap for beerkind.