A spectacular nail-biter of a landing was just the beginning. This was the year Mars’ rover Curiosity proved its worth by giving researchers unprecedented access to the Red Planet. 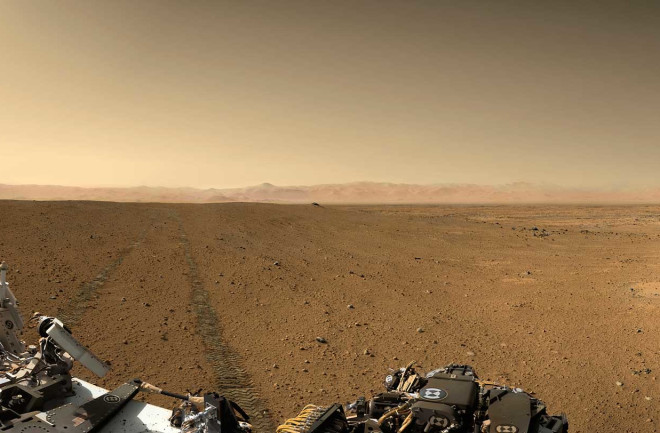 Curiosity looks back at the walls of Gale Crater in this colorized view.  | NASA/JPL/MSSS/Damia Bouic

In 1976, the Viking spacecraft gave us the first clear picture of the Martian surface — and sparked hopes that the barren, toxic planet once hosted life. In 2013, the rover Curiosity found the most convincing evidence yet that the planet was once habitable, as well as clues about why life there might have died out.

The $2.5 billion rover, roughly the size of a Mini Cooper automobile, discovered an ancient streambed soon after landing — evidence that water once flowed there. Next, Curiosity used its considerable payload of geologic tools to dig up further proof.

Its robotic arm drilled a 2.5-inch borehole in mudstone bedrock. The robot fed the resulting rock powder into its Sample Analysis at Mars (SAM) instrument, which heated the sample, vaporizing it into gases that the tool could analyze.

Meanwhile, the Chemistry and Mineralogy (CheMin) tool beamed X-rays at the powder. The scattering of the rays reveals crystal structures, making it possible to identify Martian minerals.

The findings: carbon, hydrogen, oxygen, nitrogen, sulfur and phosphorous — key ingredients for life — plus chemicals such as sulfur dioxide and hydrogen sulfide that could provide energy for microorganisms. All were found in a locale that was once wet, and neither too salty nor too acidic.

“To tie that all up in one ball of twine: We found a habitable environment,” says John Grotzinger, Mars Science Laboratory project scientist at the California Institute of Technology.

Nonetheless, the rover found no sign of methane in the atmosphere, dashing hopes that methane-producing microbes might still dwell there now. By sampling other atmospheric gases, Curiosity also found one reason why life-friendly conditions vanished.

Compared to the raw materials found elsewhere in the solar system (a record preserved in the sun and the gaseous planets Jupiter, Saturn, Uranus and Neptune) the Martian atmosphere has more heavy isotopes — heavier versions of basic elements such as carbon and oxygen. The skewed ratio suggests that the planet’s lighter isotopes escaped as part of a gaseous atmosphere and left a disproportionate amount of the heavy ones behind.

The rover’s journey also collected evidence that a manned mission to Mars would require better shielding to safeguard the crew. The spacecraft carrying Curiosity found that with today’s propulsion and shielding technology, Mars-bound astronauts would be exposed every five or six days to as much radiation as a whole-body CT scan, a total of about 662 millisieverts by the end of the yearlong round-trip journey. This figure is beyond safety guidelines and enough to raise lifetime cancer risk by as much as 3 percent.

NASA is testing out new lightweight, durable shielding materials such as one made with hydrogen-filled nanotubes. Unlike larger atoms, when hydrogen is hit by cosmic rays it does not break down into showers of secondary particles that bombard astronauts with additional radiation.

Curiosity is now trekking toward the 3.4-mile-high Mount Sharp, where exposed rock layers that have preserved billions of years of geologic history may reveal more secrets about the Red Planet’s past. The rover should cover the five rugged miles in about a year. “Right now, it’s pedal to the metal,” says Grotzinger.