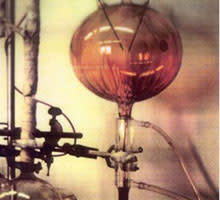 Vials holding the results of a famous chemistry experiment conducted 55 years ago have been discovered in dusty cardboard boxes, and a new analysis of their contents has revealed fresh insights into a big question: the origin of life on earth. In 1953, chemist Stanley Miller tried to duplicate the conditions present on the primordial earth in laboratory flasks, and while some of his results were published to great acclaim, other results were packed away and forgotten--until now.

Miller's classic experiment involved putting atmospheric components thought to reflect those of the early Earth (ammonia, hydrogen, methane, and water) in a closed system and stimulating that mixture with an electric current to mimic the effects of lightning storms. He generated a small number of biochemically significant compounds, including amino acids, hydroxy acids, and urea, showing that conditions of primitive earth can create the building blocks of life [Ars Technica].

These results generated considerable excitement, but later researchers argued that Miller was wrong about the composition of the young earth's atmosphere, and the experiment was written off as a novelty. In the new study, published in Science [subscription required], researchers analyzed vials of material that were produced by a slightly different process that Miller had viewed as a flop; in that process, the gases were also mixed with a jet of steam to replicate conditions around an erupting volcano. Using modern methods to analyze the samples, researchers found they contained a total of 22 amino acids (including some that Miller had never identified in any of his experiments), the most complex mix yet produced by Miller's method. Study coauthor Jeffrey Bada, who was a graduate student of Miller's, says the findings suggest that life could have originated on earth in the fiery and turbulent regions around volcanoes.

“The model is that you have these small pockets, volcanic hot spots,” explains Bada, in which a volatile reducing atmosphere, one in which chemicals are more likely to react with one another, may have produced amino acids. The team’s reanalysis makes it plausible that a shallow tide pool tucked into the side of a volcano and a fortuitous bolt of lightning could have led to an abundance of amino acids [Science News].

However, theories on the origin of life have moved on since the days of Miller's original experiments, and have taken decidedly new directions.

The discovery of amino acids in meteorites suggested that the building blocks of life came from space, eliminating the need for finding chemical processes that could produce them on Earth. Some scientists have since suggested places like the ocean bottom as most likely to be where the building blocks first came together as a living organism.... “My take on this is you want to consider everything,” Dr. Bada said. “If you can have a homegrown synthesis, perhaps by this mechanism we’ve described here, complemented by stuff falling from space, well, you’ve got a really rich inventory of compounds to work with and set the stage for the origin of life” [The New York Times].