Improved instruments will lower noise at the quantum level. The development opens the door to discovering more distant gravitational waves. 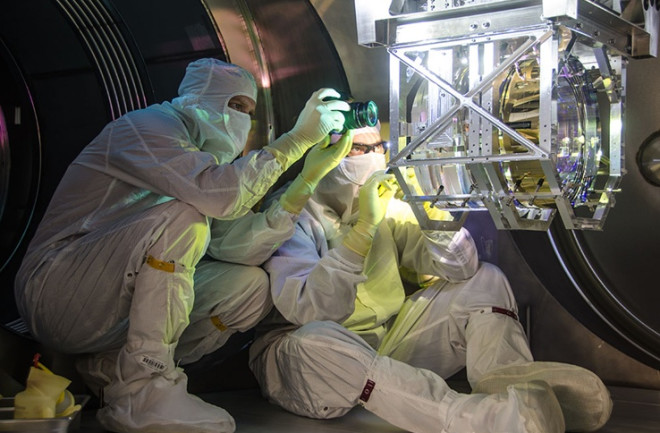 Inside a stainless steel chamber, LIGO technicians examine the surface of one of the test mass mirrors that will reflect infrared laser light to measure the effect of gravity waves. After installation, all air was vacuumed from this chamber. (Credit: Mike Fyffe/LIGO lab)

(Inside Science) -- Physicists have successfully developed a new instrument that significantly reduces quantum-level noise that has thus far limited experiments’ ability to spot gravitational waves. Collisions between massive black holes and stars are thought to generate these ripples in space-time that were first detected in 2015. In all, about 11 detections have been fully confirmed so far.

The device marks a major improvement to the Laser Interferometer Gravitational-wave Observatory, or LIGO, increasing its detection range by 15 percent. Since the sky is a sphere, scientists expect to be able to detect about 50 percent more gravitational waves. They now predict that they will catch dozens of these rarely detected events during LIGO’s ongoing experiment run through April 2020, which could transform their understanding of the phenomena. The collaboration published their findings today in the journal Physical Review Letters.

“This is really the turning point, because now we can really do statistics” with all these detections, said Lisa Barsotti, an MIT astrophysicist and one of the scientists leading the effort. “That’s why it’s becoming a new era in gravitational wave astronomy.”

LIGO’s detectors in Hanford, Washington and Livingston, Louisiana reveal an incoming gravitational wave using giant interferometers. These involve lasers bouncing off mirrors and traveling along two L-shaped arms 4 kilometers in length. A gravitational wave strains the arms so that the pair of laser beams become out of phase.

But physicists’ ability to detect such a tiny signal is limited by seemingly insurmountable quantum noise, due to random fluctuations that slightly modulate the arrival time of photons, the smallest quantum bits of laser light. To remedy that, Barsotti and her colleagues use a quantum “squeezer,” a crystal in the cavity of the arms of the interferometer that manipulates the interactions between the laser and the quantum vacuum and produces smaller fluctuations among the photons.

The achievement brought together expertise in quantum physics and astrophysics and enables more sensitive detections of black holes and extremely dense neutron stars as they smash into each other. Other colliding objects, like supernova explosions and more typical stars, create gravitational waves that are still too tiny to pick out with current technologies.

Similar quantum squeezing devices are also being tested by LIGO’s European counterparts in Advanced Virgo, using detectors built in northern Italy. Barsotti predicts that quantum squeezed light will become the standard for all next-generation detectors, like the proposed Cosmic Explorer, which would have arms stretching 40 kilometers on the ground, further increasing its sensitivity.