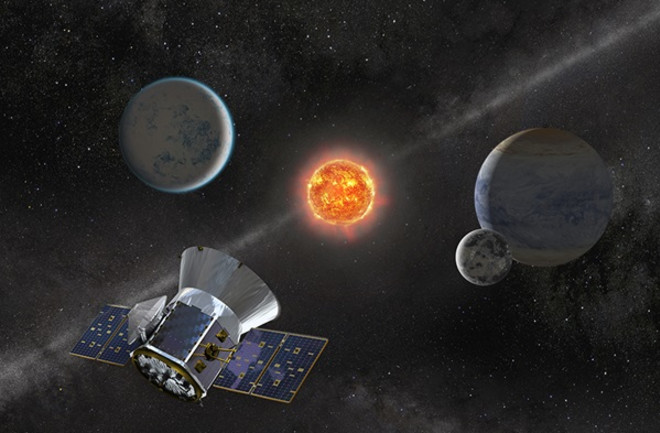 The Transiting Exoplanet Survey Satellite, or TESS, is designed to hunt for planets among nearby bright stars. (Credit: NASA’s Goddard Space Flight Center)

TESS finds planets by watching the dip in light as a planet passes in front of its parent star. It began science observations on July 25 and the first set of information was available to astronomers on September 5, but the first step in examining TESS’ data is to eliminate false positives. Sometimes a possible “planet” will actually be a binary star blocking its companion’s light, or it could be sunspots on the star’s surface, no second body needed.

While most of these planetary candidates will be discarded upon future analysis, principal investigator George Ricker at the Massachusetts Institute of Technology told Astronomy there are likely six new bona-fide planets lurking in this data alone. Ricker says that usually five to 20 percent of planetary candidates turn out to be true planets, once the transit method is followed up by the radial velocity method on the ground (which observes the influence of an orbiting object). And even amateurs can help with the search, he said.

“We make alerts available to astronomers worldwide, and we continue to do that, because there are a lot of amateurs with superb instruments they can use for the initial parts of the screening,” Ricker said, adding the process will likely take months or years due to the number of planetary candidates – suspected rocky planets and larger ones – to double-check.

“As we become more adept at seeking these things out, we are going to get 100 or 200 more [candidates] per sector. There will be a lot to work through. I expect there are going to be 3,000 or so potential objects of interest,” he added.

The transit method of exoplanet detection involves staring at a single star to look for dips in its light associated with the passage of a planet. (Credit:NASA)

The transit method of exoplanet detection involves staring at a single star to look for dips in its light associated with the passage of a planet. (Credit: NASA)

Hunt for Nearby Planets

It’s a promising start for TESS, which is supposed to find 50 rocky planets — worlds that are four times Earth’s diameter, or smaller — in its primary three-year mission. NASA is on a long-term hunt for planets like Earth, and with the long-running Kepler planet-hunter mission running low on fuel, TESS is billed as a logical successor to Kepler’s work.

While Kepler’s primary mission focused on distant stars in a zone of the constellation Cygnus, TESS is an all-sky survey optimized to look at close-up stars. It travels in a never-before-used lunar-resonant orbit that brings TESS around Earth twice for every time that the Moon circles the Earth once. TESS moves its wide view between different sectors of the sky roughly every month.

TESS will study stars that are 30 to 100 times brighter than those surveyed by Kepler. Brighter stars are easier to observe from the ground if something interesting is found, they are also likely closer than most of Kepler’s stars. So the hope is with TESS observations, there will soon be a network of telescopes doing follow-up work on the planets it finds.

All NASA missions go through periodic reviews to determine if they should receive more funding for longer periods of work. So far, indications are positive that TESS will exceed its initial goal of 50 rocky planets; TESS’ observations are already cleaner (better signal to noise) than expected. The spacecraft is also expected to find planets that are larger and gaseous, but its formal goal is more focused on rocky planets.

Furthermore the spacecraft’s trajectory is so efficient that TESS has enough remaining fuel to do its observations for another century or two; in other words, unlike Kepler, the spacecraft’s end of life will not come from running out of gas. TESS has also effectively tripled its storage capacity because the spacecraft is more stable than expected in its orbit; this means it takes fewer bits per pixel to generate an image and store it on the spacecraft. (Bits per pixel is a measurement of how much information is stored in the image; more bits per pixel requires a larger file size.)

During the extended mission, Ricker said the team will try to send information down to Earth even more quickly to catch more short-term phenomena. TESS has already spied several new near-Earth asteroids, one comet, and a supernova during its short time in orbit, but adding a more rapid response will allow astronomers to see more star explosions — as well as events such as tidal disruptions in stars that are orbiting close to another object, such as another star.

What the Future Holds for TESS

While the search for “Earth 2.0” is still ongoing, Ricker said it’s possible there already are small planets sitting in the TESS dataset. “We’ve seen indications that there are several small planets that are in this initial set, and we’re just going through the process of looking at them and making sure that we really got the properties set and it isn’t a false positive,” he said.

The candidates TESS finds will also serve as prime targets for follow up with the James Webb Space Telescope (JWST), currently set to launch in 2021. These worlds, if they possess Earth-like life, would have chemical signatures in their atmosphere visible in the infrared — exactly the wavelength regime in which JWST will operate. TESS’ sectors are also perfectly poised in JWST’s “continuous viewing zone,” which is the area of sky it will be able to observe at any time of the year during its orbit.

As TESS observations continue, the planets will come pouring in. And as telescopes on the ground and in space follow up, our galactic neighborhood will grow.