The series of paper cells developed by researchers at the University of Washington uses origami folds to absorb the force of impacts. 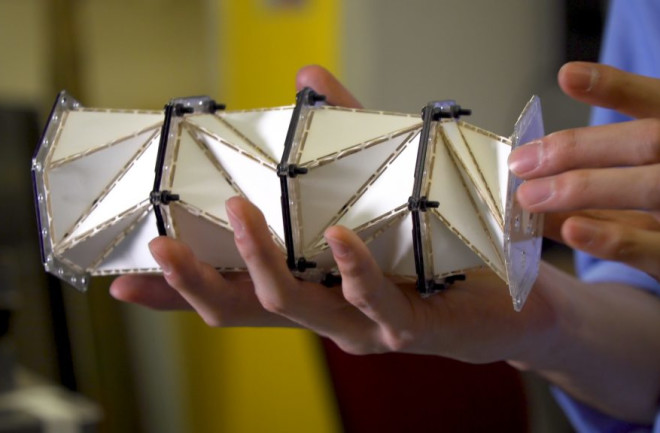 Whether applied to auto collisions or rocket landings, absorbing energy from impacts is a valuable trait, and industries have been working on various solutions for years. For spacecraft, landing safely has entailed everything from inflatable airbag systems to sky cranes to retro-thrusters. But what if the force of impact never made it to the spacecraft at all?

That’s the idea being pursued by Hiromi Yasuda and colleagues at the University of Washington. They’re using foldable materials inspired by origami to not only absorb the shock of impact, but actually change it into a force that travels back in the opposite direction. While the prototypes are made out of paper, the researchers say that many different materials could be used, possibly changing how rockets land in the future.

The researchers publishing their findings Thursday in Science Advances.

Fold the Force Away

Yasuda’s team came up with a unique cell that twists and folds, absorbing the force of an impact. They then connected 20 of the cells into a column, and glued caps onto each cell. (Glue is generally discouraged in more traditional origami art, but in engineering labs, it’s apparently okay.) The team filmed the finished product as it was compressed from one end, sending a wave of compression through each of the cells.

Tracing the wave, the researchers found that the complex array of folds stacked on top of each other actually managed to turn the pushing force from the compression into a pulling force.

“If you were wearing a football helmet made of this material and something hit the helmet,” said Jinkyu Yang, a co-author on the paper, “You’d never feel that hit on your head. By the time the energy reaches you, it’s no longer pushing. It’s pulling.”

The applications of such a material are nearly endless. Landers on the moon, where there is no atmosphere, must rely on retro rockets today, adding to fuel payloads. SpaceX’s Falcon 9 boosters already use a similar technology, a “crush core” in their landing gear made of an aluminum honeycomb structure which can absorb energy on impact. Unlike those crush cores, though, this design would likely be re-usable. And the potential benefits extend beyond space to the auto industry and more.

And if any school children are trying to drop an egg off a building, they might try their hand at origami.