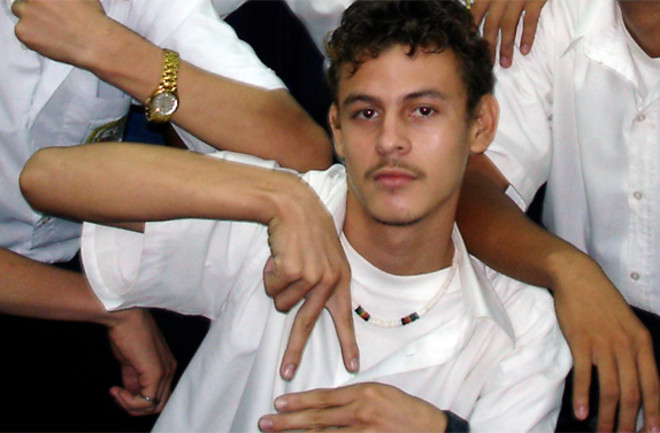 In the 1970s, a group of deaf Nicaraguan schoolchildren invented a new language. The kids were the first to enrol in Nicaragua’s new wave of special education schools. At first, they struggled with the schools’ focus on Spanish and lip-reading, but they found companionship in each other. It was the first time that deaf people from all over the country could gather in large numbers and through their interactions – in the schoolyard and the bus – Nicaraguan Sign Language (NSL) spontaneously came into being.

NSL is not a direct translation of Spanish – it is a language in its own right, complete with its own grammar and vocabulary. Its child inventors created it naturally by combining and adding to gestures that they had used at home. Gradually, the language became more regular, more complex and faster. Ever since, NSL has been a goldmine for scientists, providing an unparalleled opportunity to study the emergence of a new language. And in a new study led by Jennie Pyers from Wellesley College, it even tells us how language shapes our thought.

By studying children who learned NSL at various stages of its development, Pyers has shown that the vocabulary they pick up affects the way they think. Specifically, those who learned NSL before it developed specific gestures for left and right perform more poorly on a spatial awareness test than children who grew up knowing how to sign those terms.

The idea that language affects thought isn’t new. It’s encapsulated by the ‘Sapir-Whorf hypothesis’, which suggests that differences in the languages we speak affect the way we think and behave. Typically, scientists test this link between language and thought by either comparing people who speak different languages, or by watching children as they, and their linguistic skills, develop. But both approaches have problems. Speakers of different languages also vary in many other ways that can affect the way they think, while growing children are also developing in many other aspects of their mental skills, which could confuse any effect of language alone.

But NSL cuts through both of these problems. Here is a language that was learned by successive waves of children whose mental skills were relatively mature, who all came from the same culture, and who all learned the language at the same age.

In most sign languages, signers map the positions of real-world objects using their hands, rather than using words like ‘left’, ‘inside’ or ‘over’. Someone signing a cat on a table would place one hand, representing a cat, over the other, representing the table, with no separate sign for ‘on’. The same works for left and right, with the added rule that usually, the signer represents the scene from their own perspective.

But NSL hasn’t quite got to that stage yet. In the first version developed in the 1970s, the children hadn’t settled on a consistent way of indicating left and right, and the locations of objects in their conversations are fairly ambiguous. The second group of children to expand NSL in the 1980s had more specific conventions for position.

Pyers compared the abilities of people from both groups, now fully grown adults, in two spatial tests. First, she led them into a small room with a single red wall. She hid a token in one corner of the room, blindfolded the children and spun them around until they lost their bearings. When she removed the blindfold, the children had to say where the token was. The second test, like the first, involved hiding a token in the corner of a room, but this time the room was a tabletop model that was rotated while the children were blindfolded.

In both tests, the second group of adults (who learned the more advanced form of NSL) outperformed the first group. Even though their memories and ability to understand the tasks were just as good, the expanded vocabulary of geographical gestures that they learned as children also gave them better spatial abilities well into adulthood.

By comparing the first group of NSL signers to typical children, Pyers also learned something about what’s going on in their heads. Children find the task easy and answer quickly but they often make mistakes. They’ll orient themselves to the geometry of the room, using the long and short walls to tell them where the token is. But they tend to ignore the red wall landmark so when they make mistakes, they usually go for the corner diagonally opposite to the correct one.

The first group of NSL signers were very different. They were more accurate, suggesting that their experience and maturity does at least count for something. Their mistakes are evenly distributed around the three other corners, suggesting that they use neither the landmark nor the room’s geometry to help them. And they took a long time over the test and said that they found it very difficult. They were aware of their own uncertainty, as adults often are, but they simply didn’t have a reliable mental map of the room and its hidden token.

Pyers explains, “The first-cohort signers find these tasks challenging because they do not have the language to encode the relevant aspects of the environment that would help them solve the spatial problem.” She added, “[They] did not have a consistent linguistic means to encode ‘left of’.”

This is a fascinating result, especially since the first group of adults were older and had been signing for a longer time. It’s clear evidence that our spatial reasoning skills depend, to an extent, on consistent spatial language. If we lack the right words, our mental abilities are limited in a way that extra life experience can’t fully compensate for. Even 30 years of navigating through the world won’t do the trick. And they may never catch up, even though the language they invented has advanced – after all, some studies with American Sign Language suggest that people who learn spatial terms later on in life never master them.

This is a subtly different idea than the one espoused by the Sapir-Whorf hypothesis, which suggests that different languages influence how speakers think about their world. By contrast, Pyers’ results focus “on those aspects of human cognition that are dependent on acquiring a language, any language”. She says that the room tasks tap into a set of mental skills that “crucially depends on language and that this relationship between language and spatial cognition should hold true for speakers of all languages”.

The Nicaraguan signers may well reveal more ways in which language fundamentally affects thought, for other aspects of the language besides spatial locations became more complex over time. These include ways of signifying mental states, and Pyers has already shown that as these became more sophisticated, so did the signers’ abilities to understand the fact that other people can hold false beliefs. Meanwhile, Ann Senghas and Molly Flaherty, who worked on the current study, are looking at how the emergence of a counting system in NSL affected the numerical skills of the signers.

The grand idea behind all of these singular observations is that as human language evolved, our mental abilities became increasingly entwined with linguistic devices. Those devices are part and parcel of modern language, and thus modern thought. NSL, being a new language, is the exception that proves the rule – as it developed, so did the abilities of those who learned it, from their skills at visualising objects in space to their capacity for understanding the minds of their peers.