Equations calculate how a rubbery material deforms under pressure. 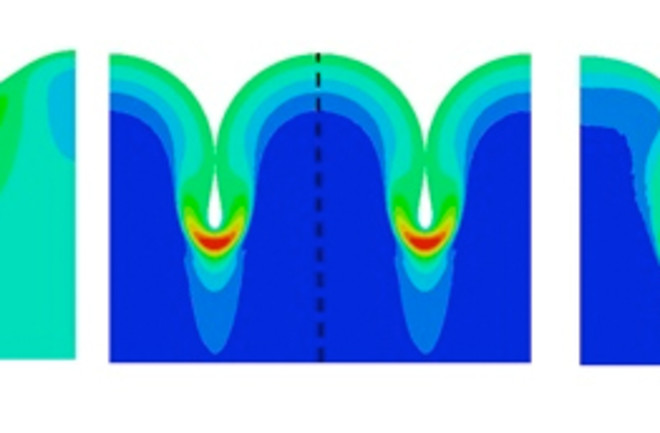 “Folds are everywhere,” says Kyung-Suk Kim, an engineer at Brown University. They’re in the wings of insects, the surface of our brains, the fabric of umbrellas, even the crust of the Earth.

In June, Kim’s team reported the first general mathematical description of how the surfaces of common rubbery materials fold. Imagine laying a sheet of paper flat on a table, then squeezing it together from both ends. First, it begins to wrinkle: Little waves form on the surface, with rounded peaks and U-shaped troughs. As you squeeze it more, the wrinkles accumulate, and the U-shaped troughs compress until two tips of each U touch. With still more force, the lower part of each U collapses, forming creases.

By analyzing these states — called “ruga” states from the Latin word for “wrinkle” — Kim and postdoc Mazen Diab developed a series of customizable equations that allows researchers to calculate, from the stiffness of a material, how much it must be compressed to wrinkle, fold or crease. The equations also predict how hard they must pull the sheet to unfurl the material.

The new equations could shed light on how brain tissue compresses during a head injury, as well as enable a vast array of engineering applications, including creating hairpin-shaped crinkles in thin materials to control liquids on tiny devices; building wearable gadgets that stretch and wrinkle just so; making ultrathin electronics that are resistant to harmful creases; and more. To control folds is to control the critical nooks and crannies of the world.