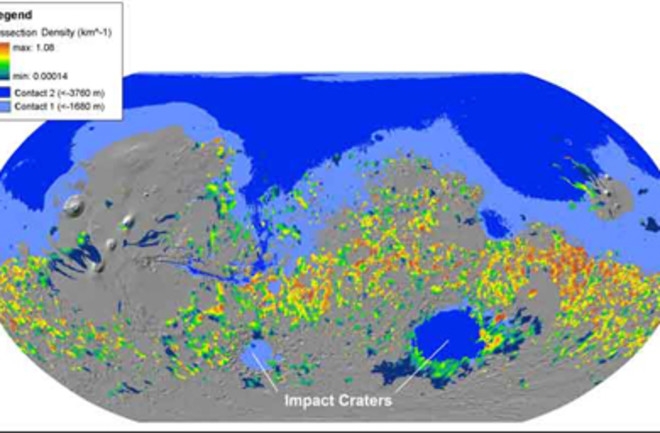 Scientists have long suspected that Mars was once a wet place, and that water helped to shape the geography we see there today. Now, thanks to a study published in the Journal of Geophysical Research, we don't have to simply imagine what a watery Mars might have looked like long ago—geographers have created this new map of the Red Planet covered in blue water.

This new research addresses the longstanding question of whether surface water carved features, or whether other processes like groundwater sapping could've been involved. The new map, created by a computerised analysis of satellite data, shows that some regions of Mars had valley networks almost as dense as those on Earth. ''It is now difficult to argue against runoff erosion as the major mechanism of Martian valley networks,'' said Professor Wei Luo, from Northern Illinois University in the US, who led the research [The Telegraph]

. Instead, he argues, there must have been rivers on Mars long ago to create such dense networks. The only previous map of martian valleys, created by hand and based on 1990s satellite images, showed a far less extensive river system. But Luo's map was created "semi-automatically" by processing new satellite data, which extrapolated the existence of a huge ocean in the planet's northern half.