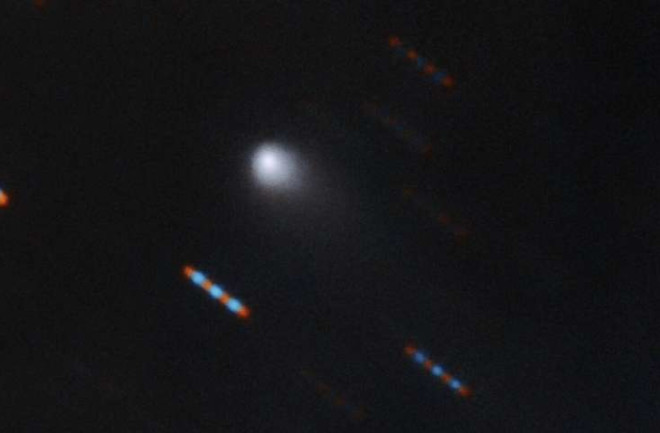 Astronomers are in a frenzy to learn more about the newest visitor to our solar system, comet C/2019 Q4. While it hasn’t yet been officially confirmed, they’re largely convinced the object originated outside our solar system.

“I will say there is no debate at this point,” said Quanzhi Ye, astronomer at the University of Maryland. “The orbit is clearly interstellar.”

Last week, on September 11, the Minor Planet Center, a division of the International Astronomical Union charged with cataloging the orbits of minor planets, asteroids and comets, issued a circular announcing the discovery and initial observations of the comet. In the days since, astronomers worldwide have turned their telescopes to gather as much information as possible about the interstellar visitor, which is only the second known, after the discovery of the asteroid ‘Oumuamua in 2017.

C/2019 Q4, initially named Gb00234, was first seen by amateur Ukrainian astronomer Gennady Borisov on August 30. Borisov was looking close to the Sun, an area most surveys don’t cover due to its poor visibility. And because of that proximity to the Sun in the sky, the object remains hard to see, but astronomers have already clearly resolved its tail, identifying it as a comet.

Early calculations confirm a hyperbolic orbit, meaning the object is not bound to the solar system. Those same observations suggest the hyperbolic excess velocity — a measure of how fast the comet is travelling — is between 30 to 40 kilometers an hour, which is a strong sign of its interstellar nature.

“All the observations are taken close to the Sun and in those cases the uncertainties [in the orbit calculations] can be a little large, so we’re waiting for the object to be a little farther away from the Sun in the sky to confirm [the orbit],” said Davide Farnocchia, an astronomer at NASA’s Jet Propulsion Laboratory who has been involved in analyzing some of the initial images of the comet. “It will probably take days or weeks before we’re fully confident.”

Once observations definitively confirm the hyperbolic orbit and interstellar origin, the Minor Planet Center is expected to publish an announcement. The comet is the 48th to be discovered and reported by the Minor Planet Center this year, but if confirmed, it would be the first interstellar comet ever discovered. The comet will likely be renamed with the prefix 2I/ according to standard nomenclature. Some astronomers have proposed the comet be named 2I/Borisov after its discoverer. The official name for the first interstellar object, 1I/ʻOumuamua or 1I/2017 U17, comes from the Hawaiian word meaning scout and was chosen to depict the object as a messenger sent to us from afar.

In the meantime, astronomers are rushing to put together proposals to use major telescopes to observe the comet in greater detail in the weeks to come, hoping to measure things like its composition, size and rotation. From preliminary observations astronomers suspect the nucleus of the comet is somewhere between one mile to 16 kilometers in diameter, and it looks like other known comets.

“From the very early results, it’s similar to comets in our solar system,” said Mike Kelley, astronomer at the University of Maryland who is already analyzing initial data. “It has a similar color, a very red color, which is already an interesting result.”

The comet is slightly brighter than the average comet, but it is not visible to the naked eye. However, at around 18th magnitude, the comet is visible when imaged with a camera attached to mid-sized telescope, and given it’s much brighter than its interstellar predecessor, it will likely become a target of interest for amateurs as well as professional astronomers.

Since the comet is still inbound, it will provide astronomers and amateurs plenty of time to observe it further. ‘Oumuamua was seen on it’s way out of the solar system and within a few weeks was already to faint to be seen by even the Hubble Space Telescope. The new comet will reach closest approach to the Sun around December 7 and likely remain visible for an entire year.

The new discovery will undoubtedly spark a gold rush of research on interstellar objects. Already astronomers are submitting papers about the new comet to journals and online preprint sites.

“Hopefully, observing this one and the previous interstellar object ‘Oumuamua, and more to come, will help us understand not only how our comets and asteroids compare to other solar systems’ comets and asteroids, but also about this journey that they do to the galaxy,” Kelley said.