New Insights Into Antimatter, 20 Years In the Making 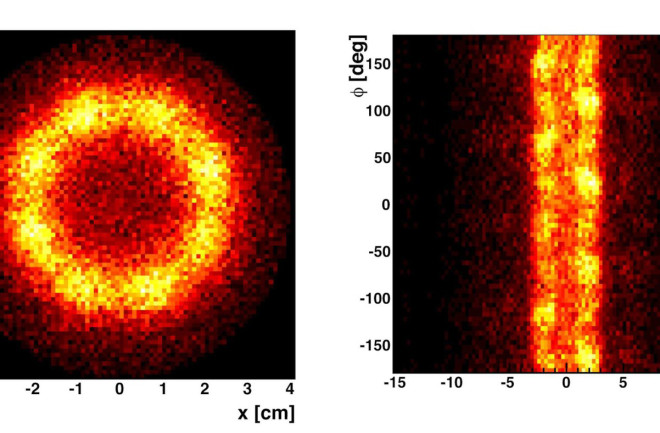 Anti-hydrogen particles react with the walls of the experimental chamber, producing the flashes of light seen here. (Credit: CERN) Antimatter is more than a science fiction concept that allows engineers to power the Enterprise. It’s an actual — albeit small — constituent of our universe. While antimatter is rare, it can exist under the right conditions. Information about the way antimatter behaves provides a powerful tool for testing the Standard Model of particle physics we currently use to understand the forces that govern the way particles behave.

For Every Particle, An Anti-

Antimatter was first predicted by British physicist Paul Dirac in 1928. He proposed that every particle of matter should have a corresponding antiparticle. These antiparticles are identical to their particle counterparts in every way except for charge. For example, the antimatter counterpart to the negatively-charged electron is the positively-charged antielectron, also called the positron. When matter and antimatter meet, they annihilate each other and leave only energy behind. The Big Bang should have created matter and antimatter in equal amounts, but today, our universe is dominated by matter, with very little antimatter present. Understanding why this asymmetry exists would be a significant step towards understanding the origin and evolution of our universe. However, naturally-occurring antimatter is often immediately destroyed when it encounters the universe’s abundant matter. Today, particle physicists can routinely create antimatter for study at the CERN Antiproton Decelerator facility, which has led to several new breakthroughs in the characterization of antimatter.

In a recently-published Nature article, CERN’s ALPHA collaboration has announced the very first measurement of a spectral line in an antihydrogen atom. This result, which was over 20 years in the making, was achieved using a laser to observe the 1S-2S transition in antihydrogen. To within experimental limits, the ALPHA collaboration’s results show that this transition is identical in both hydrogen and antihydrogen atoms — a condition required by the Standard Model. If these transitions were different, it would essentially break our current understanding of physics. The 1S-2S transition is one of many that contribute to hydrogen’s spectrum. A spectrum is created when electrons that have been excited by radiation “fall” from a higher energy level inside an atom to a lower one. This process releases energy at precise wavelengths. Each element produces a unique spectrum, like a fingerprint. Astronomers often use spectra to determine an object’s composition based on the light it produces.

To observe the 1S-2S transition in antihydrogen, the ALPHA collaboration first had to create antiatoms and keep them stable — no easy task. ALPHA’s recipe for antihydrogen consisted of mixing plasmas containing antiprotons and positrons together to produce antihydrogen atoms. The resulting antiatoms were then magnetically trapped to hold them for experimentation. From an original batch of 90,000 antiprotons, researchers could create 25,000 antihydrogen atoms; of these, the ALPHA collaboration managed to trap and study an average of 14 antiatoms per trial. By illuminating the antihydrogen atoms with a laser tuned to provide exactly the energy needed to achieve the proposed transition, researchers were then able to observe the resulting emission to look for deviations from the spectrum of normal hydrogen. The ALPHA collaboration’s result, along with the results from other antimatter experiments performed by the ASACUSA and BASE collaborations, shows just how far antimatter research has come at CERN. The ALPHA collaboration plans to further refine the precision of their results in the future for even more robust testing of the Standard Model. Such high-precision antimatter testing may also be able to shed light on the matter-antimatter asymmetry we observe in our universe.