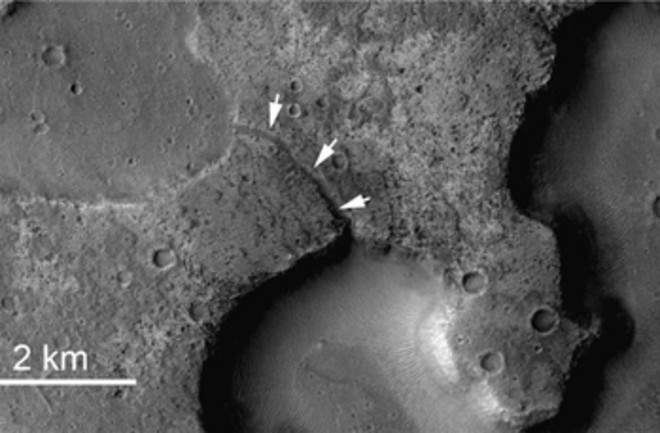 NASA's Mars Reconnaissance Orbiter (MRO) has taken detailed pictures of what scientists are saying is evidence that large lakes of liquid water sat on the planet's surface relatively recently--which is to say, about 3 billion years ago. MRO imaged several deep depressions that scientists previously attributed to the sublimation of underground ice 4 billion years ago. However, the new images show that the depressions are connected by long channels, and researchers say

these channels could only be formed by running water, and not by ice turning directly into gas. The scientists' ageing of the region, which on bodies like Mars is done by counting craters, suggests the features formed during the so-called Hesperian Epoch on the Red Planet [BBC News]

. Essentially, this means that there was water on Mars a billion years more recently than previously thought. The findings were published in the journal Geology. The researchers aren't quite sure how the lakes, which are up to 12 miles long, were filled with water. Scientists had believed that the planet was a frozen wasteland during the Hesperian Epoch, but researchers now suggest that it may have had short-lived warm phases.

Mars could have been warmed by volcanic activity, meteorite impacts or even orbital shifts. The result would be a temporary increase in planetary temperature as the gases created in those events thickened the Martian atmosphere [SPACE.com]

Regardless of how it happened, scientists and space nerds are giddy about the possibility that these lakes could have once harbored life.

A few months ago, NASA announced their finding of a huge ice sheet under the Martian surface, and where there's water, there could have once been life. According to researcher Sanjeev Gupta,

"potentially life could have survived in these lakes, we would be talking about microbial life.... But now we have shown that there was standing water, this is another avenue to explore” [Telegraph].