Pluto's been a blank space in ourportrait of the solar system,so obscured that astronomersdid not even know its exactsize or color. But no longer. 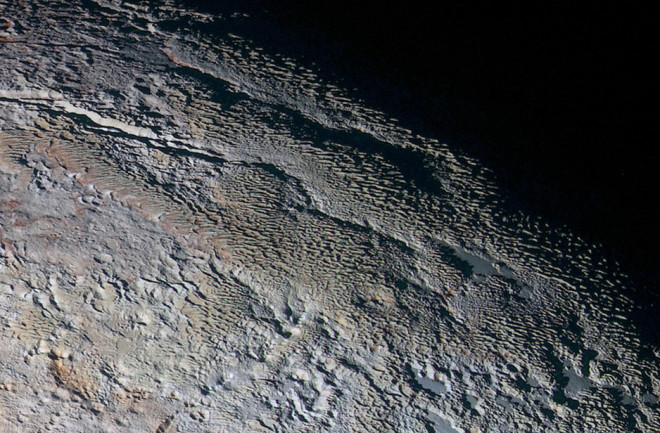 On July 14, NASA’s New Horizons probe flew just 7,750 miles past Pluto’s surface and began radioing back detailed pictures. The sudden unveiling has revealed a complex and inexplicably varied landscape. “It’s a total surprise,” said mission leader Alan Stern as he pondered the images. “If an artist had painted this Pluto before our flyby, I probably would’ve called it over the top.”

Some areas of Pluto appear dark and heavily cratered, indicating extreme age. Their coloration may come from frozen methane irradiated by the sun and converted into tarlike compounds known as tholins, notes Will Grundy of Lowell Observatory. The whole globe evidently has been painted ruddy brown by a thin coating of such chemicals, prompting New Horizons scientists to dub it “the other red planet.” Right next to Pluto’s ancient terrain are utterly different landforms, including rippled fields — dunes, possibly — and craggy, 11,000-foot mountains. Those peaks must be composed of water ice, Stern explains, because it is the only likely surface material strong enough to support them. (Water is as hard as granite at Pluto’s surface temperature of minus 390 degrees Fahrenheit.)

From there, the findings get even stranger: Some material appears to flow down from the mountains. Most likely it is nitrogen ice, accumulated as gases in Pluto’s atmosphere freeze during its 60-year-long winter. Beyond the nitrogen glaciers are extensive plains, devoid of the expected craters and marked instead by polygonal depressions where relatively warm material may be seeping up from below. Such fresh-looking regions indicate recent — possibly ongoing — geologic activity. Even more surprising, New Horizons images show that Pluto’s moon Charon, about half the size of the 1,473-mile-wide world, is also dynamic, with long fractures, smooth lowlands and odd, isolated massifs.

The new views of Pluto and Charon consolidate a revolutionary idea brewing since the Voyager missions of the 1970s. Before then, scientists had broadly assumed that small bodies in the outer solar system must be cold and inert. In reality, space probes showed that the moons of the outer planets are wildly active, from the sulfur volcanoes of Jupiter’s Io to the dusty geysers of Neptune’s Triton. The fallback assumption was that moons are special, energized by the giant worlds they orbit, but that surely small standalone bodies like Pluto must be deadly dull. New Horizons has now blown away that bit of planetary chauvinism as well, and replaced it with a captivating mystery: What is the energy source driving all the activity?

One idea is that oceans deep inside these worlds hold residual heat for billions of years. Whatever the cause, the effect is probably extremely common. Pluto and Charon have hundreds of thousands of cousins, collectively filling a zone called the Kuiper Belt. It’s a good bet that many of those little-understood objects are active, too.

New Horizons’ mission is still far from over. In January 2019, it is scheduled to visit another, much smaller Kuiper Belt object known as 2014 MU69. Meanwhile, the probe will continue sending data from the Pluto flyby through the end of 2016. The results should fill in many more brushstrokes — not just for Pluto’s portrait, but also for the entire process of planetary formation.