Four billion miles away, an ancient and pristine world awaits the Pluto hunter. 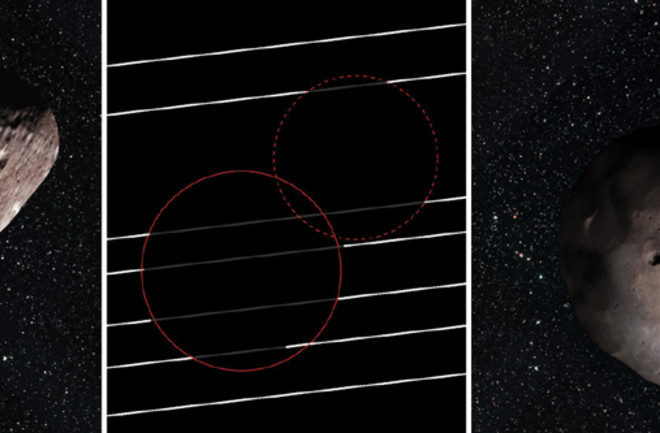 Scientists have only a rough sense, based on ground observations, of the shape of MU69 (center). It could be a single blob, roughly potato-shaped (left), or a dual-lobed object (right). | NASA/JHUAPL/SWRI/Alex Parker

On a desolate coastline in Patagonia, astronomer Alan Stern huddles behind a semitrailer to block his telescope from the wind. It’s not long after midnight on July 17 — the peak of southern winter — and 40 mph gusts howl across the landscape.

Stern, who heads NASA’s Pluto-visiting New Horizons mission, is one of 56 scientists with two dozen small telescopes spread for 30 miles along Argentina’s Atlantic coast. Some evade the telescope-shaking wind behind 15-foot-tall steel-framed tarps, built with supplies raided from local hardware stores. A few find shelter in natural alcoves on the beach.

“The conditions were generally miserable for observing,” Stern says. But above, the heavens were crystal clear.

Their celestial quarry: the roughly 14-mile-wide shadow of a world 4 billion miles away, one just discovered a few years earlier. When this ancient object passes in front of a background star, the star’s light dips — like a mini-eclipse — allowing the astronomers to tease out the mystery world’s size, shape and reflectivity. The data can tell the New Horizons team how to position the spacecraft and calibrate its camera when it actually visits next year. Most crucially, the light dip might reveal spaceship-killing debris nearby.

But catching the star as it dims isn’t easy. The shadow passes over Patagonia at 60,000 mph, and the team already failed in their two previous attempts to see this shadow, called an occultation. “This was our last chance,” Stern says.

Their agony paid off. Five of the 24 telescopes saw the star blink as a speck of a world passed in front, revealing details otherwise impossible to know in advance.

Now, far beyond the eight planets and a billion miles beyond Pluto — the most distant object ever explored — this little prince of a planet is ready for its close-up. The tiny, reddish world, dubbed 2014 MU69, stretches just a dozen miles or so, a red potato about the size of Manhattan. On Dec. 31, 2018, an army of astronomers will turn their gaze here for a few hours as NASA’s New Horizons spacecraft blazes by at some 8 miles per second.

“It’s been in a deep freeze at 400 degrees below zero all that time, so it’s a perfectly preserved relic from the birth of our home solar system,” Stern says of the 4 billion-year-old object. “No one’s ever been to any kind of target like this.”

Last summer, a team of astronomers tried three times to catch the tiny shadow of a distant world as it raced across our planet, like a tiny eclipse, at 60,000 mph. On June 3, they deployed an array of telescopes at sites in Africa and South America, but never saw the 14- to 25-mile-wide shadow. On July 10, the scientists chased the shadow across the South Pacific aboard NASA’s SOFIA Boeing 747, which packs a Hubble-sized ‘scope. They got within 1 mile and one second of its predicted time and place, but still missed. Yet those attempts, paired with space telescope observations, let them refine their predictions. On their third and final chance, the team caught MU69 from Argentina. Their results are now helping plot New Horizons’ course.

A century ago, our solar system seemed split into two tidy groups: the terrestrial inner planets — Mercury, Venus, Earth, Mars — and the giant, gaseous outer worlds. Then Clyde Tombaugh found Pluto in 1930. It was small and seemingly alone at the ragged edge of the solar system.

Scientists are suspicious of such oddballs, and soon some predicted it was part of a new third planetary realm. But Tombaugh searched for years and never found another Pluto.

Hard evidence arrived half a century later, when scientists discovered Pluto’s large moon, Charon. They soon realized the pair formed when two dwarf planets collided in the outer solar system. The odds of that happening are slight, unless Pluto was part of a third group.

In 1991, Stern did the math. If only two Pluto-like worlds ever existed, the chances they’d collide are less than 1 in a million. The odds get even greater when you add in other observed coincidences in the neighborhood. It would be like plunging your hand into 100,000 tons of beach sand and snagging the only purple grain, Stern wrote in Astronomy magazine at the time. Pluto and Charon make sense only if hundreds or thousands of dwarf planets once roamed the outer solar system.

By 1992, astronomers had the tools to prove their hunches correct. A telescope in Hawaii equipped with a state-of-the-art digital camera found a 100-mile-wide world they dubbed 1992 QB1 — or “Smiley.” Scientists have since turned up more than 1,000 objects in this region, now called the Kuiper Belt, a disk-shaped realm of icy objects out past Neptune. Its most famous member is Pluto, but another is about to take the spotlight.

Astronomers suspect 2014 MU69 — or just MU69 (pronounced “mew”) for short — is a “cold classical Kuiper Belt object.” This group of worlds has stayed in flat, circular orbits right where they were formed, unperturbed by the goings-on closer to the sun.

Even asteroids, which are also excellent time capsules, were stirred up by Jupiter’s gravity and bombarded by solar radiation, altering their surfaces. That doesn’t happen in the cold classical Kuiper Belt. No major planets are anywhere close, and our sun’s pale light — which shines like a dim star at that distance — has barely changed the surface of these far-flung worlds.

Scientists have only a rough sense, based on ground observations, of the shape of MU69 (center). It could be a single blob, roughly potato-shaped (left), or a dual-lobed object (right). | NASA/JHUAPL/SWRI/Alex Parker

They are truly primordial remnants from the solar nebula, a cloud of gas and dust that birthed the sun and planets. MU69 could’ve existed before there were dinosaurs, or trees — possibly even before the formation of Earth.

We’re going to fly past the oldest thing in the solar system we possibly can, says Planetary Science Institute astronomer Susan Benecchi. “And that’s exciting because [it will provide] information we couldn’t glean otherwise.”

Astronomers think MU69 is part of this cold classical population because of its location in the solar system and because its reddish hue matches the Hubble Space Telescope’s catalog of thousands of other such objects. The world is redder than even Pluto, whose appearance surprised astronomers so much that some called it “the other Red Planet.”

Sarah Hörst, a planetary scientist at Johns Hopkins University, has simulated Pluto’s atmosphere. Grab a handful of Pluto’s tholins, and you’d likely find they’re a kind of sticky powder, she says. Hörst has discovered they’re also highly electrostatically charged — they cling to the inside of vials when poked with a finger.

If MU69’s surface truly hasn’t seen many impacts, that would leave our sun’s radiation as the main force shaping, and coloring, its surface. Those conditions are prime for creating tholins. Hörst says it’s possible this bombardment has left MU69 covered in a global layer of the material. “But I don’t know,” she adds. “We’re going to find out, and that’s what’s so exciting.”

Seeing MU69 up close could also help astronomers answer another fundamental question: How do planets form? Astronomers knew the initial solar system was full of tiny rocks, and somehow they grew into planets, asteroids and everything else.

“It’s always been hard in theory to build from pebble-sized chunks that will naturally form out of the solar nebula, up to things that are tens of miles or hundreds of miles across,” says New Horizons scientist John Spencer at the Southwest Research Institute. In computer models, these objects tend to destroy each other when they collide.

Astronomers are starting to suspect that the pebbles mixed with gas in the early solar system and then clumped together, growing from pebbles all the way up to objects the size of MU69. But to verify that, they need to study the distant and tiny objects more closely, which is nearly impossible from Earth, as the New Horizons team showed when they tried to learn their target’s size and shape.

“We’re very anxious to see what these things look like up close,” says Spencer.

Easier said than done, of course. Even finding MU69 in the first place took a herculean effort. Marc Buie of the Southwest Research Institute spent nearly a decade searching for a second destination for New Horizons after Pluto, starting two years before the spacecraft launched in 2006. NASA built the probe to be light and fast. It covered 30 times the Earth-sun distance — 30 astronomical units — to reach Pluto in just about nine years. That meant minimal fuel, too, so Buie knew any detours after Pluto had to be very close to the path the spacecraft was already traveling.

To make the effort even tougher, the search area happened to overlap with the star-rich Milky Way, a region of the night sky bursting with tiny pinpoints of light. Finally, the year before the Pluto flyby, Buie’s team struck gold. MU69 popped up with just enough time to verify its position and aim New Horizons in its direction.

“To be able to just go and find a chunk of rock floating out in space 43 astronomical units away, and know that in just a few years’ time you’re going to be flying by it — that’s why I got into space exploration,” Buie says.

Once he’d found MU69, it was up to Buie and others to calculate its orbit and predict where its shadow would fall on Earth during the occultation last summer, resulting in those windswept telescopes on Patagonia’s beaches. Luckily, the astronomers saw no potential hazards near the world.

“Everything about this is do-it-yourself spaceflight,” says Stern. “Nobody’s planning to do anything like this again. I’m sure someday, somebody will go farther, but this is probably gonna hold the record for decades — a century — who knows?”

[This article originally appeared in print as "The Next Horizon]