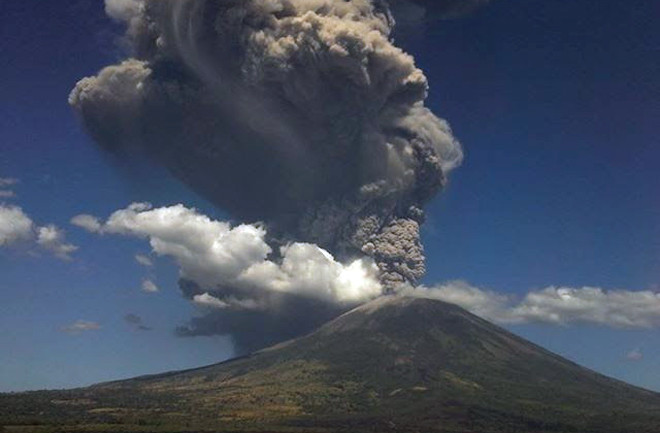 The eruption of San Miguel in El Salvador seen from El Borbollon at the Laguna el Jocotal, southern San Miguel (looking north) on December 29, 2013. Image by Ever Zelaya, used by permission. In somewhat unexpected news, San Miguel (also known as Chaparrastique) in El Salvador had an explosive eruption earlier today -- with some impressive images showing up across the internet (see above). Not a lot of details right now, but ash is falling on the towns around the volcano. It is hard to get a sense of scale from the images I've seen thus far, but the eruption column looks to be at least several kilometers tall. [UPDATE: It seems that the plume is being estimated at ~5 km / 16,000 feet. This would suggest to me a vulcanian explosion, but we won't know until the ash is examined to be juvenile (new magma) or accidental (old rocks).] The civil alert status for the area around the volcano was raised to yellow after the eruption occurred, suggesting that more explosions could follow. No word so far on any evacuations (UPDATE: 5,000 have been ordered to evacuate from around the volcano). This would be the first eruption from San Miguel since 2002, when the volcano produced a small VEI 1 eruption. The last large eruption from the volcano came back in 1967, at the end of decade of a number of VEI 2 eruptions from the volcano. The last time the volcano appear in the Global Volcanism Program's weekly activity report was in 2011, when increasing degassing was noticed. As with many Central American volcanoes, ash fall and pyroclastic flows are major hazards from San Miguel. More details as they arrive (and if this isn't enough, Etna has started a new paroxysm as well -- check out the webcam.) UPDATE 1:40 PM EST: Here are the flight restrictions from the Washington VAAC. They have the activity listed as an "ongoing eruption" and ash upwards of 9 km. UPDATE 3:45 PM EST: The Aqua/MODIS pass today caught the eruption plume (see below), but on the edge of the scene (thus its choppy nature). Hopefully the folks at the NASA Earth Observatory will post a rectified image of the plume. UPDATE: I've added a rectified image by Nahum Chazarra.

Sulfur dioxide plume (red) from the San Miguel eruption on December 29, 2013. Image: NOAA/NASA.UPDATE 6:15 PM EST: The Salvadoran government had a webcam pointed at San Miguel and captured the eruption as it started today -- check out the video.