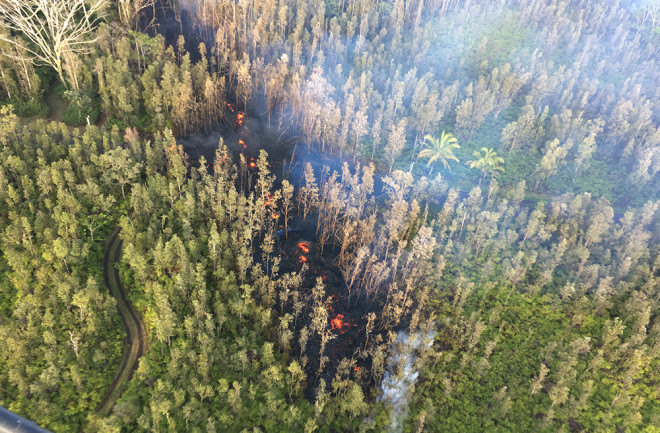 The new fissure eruption in Leilani Estates on the far downslope of the East Rift zone of Kilauea, seen on May 3, 2018. USGS/HVO. Yesterday, a new eruption started on the slopes of Kilauea. Far down the East Rift zone, in the Leilani Estates subdivision, fissures began to open yesterday. By the time evening hit, lava was spattering from the cracks and short lava flows that travelled ten meters (30 feet) soon followed. Check out the USGS video of the eruption after it had just started on May 3. UPDATE: If you want to see and hear some impressive video of the eruption, check out this - the lava spattering from the fissure is amazing. (Hat tip to Janine Krippner for this link). UPDATE: Although I don't condone flying drones in this situation, here is some great footage from a drone of the new eruption. The splattering lava and slow, short lava flows are clearly seen.

Absolutely stunning drone video of the eruption of Hawaii's #kilauea volcano. Mandatory evacuations for the Leilani Estates subdivision have been ordered.

Scientists from the Hawaiian Volcano Observatory flew over the new eruption

soon after it started and captured pictures and video of the eruption. The first thing to notice is that the area has not seen an eruption in a long time. The landscape is forested and, unfortunately, also developed. Houses are sprinkled throughout the trees in this subdivision, and much like the homes at Kalapana

, these homes are now in direct danger of being destroyed by lava flows. Luckily, these lava flows are sluggish so far, so no people are in danger and the subdivision is currently being evacuated

. The subdivision has over 700 building and 1700 residents. Looking at the USGS map of Kilauea, it appears that there haven't been eruptions in this part of the East Rift zone since 1955 and most of the flows in the area date from the 1840s and 1790s. UPDATE 9:45 PM May 4: A magnitude 6.9 earthquake

struck the East Rift zone at about ~11:30 AM in Hawai'i. The earthquake was about 16 kilometers to the southwest of Leilani Estates, where the new eruption started yesterday. This is a large earthquake for Kilauea and its shallow depth (5 km) suggests it is related to the new injections of magma into the east rift. The eruption is ongoing at Leilani Estates

, with at least 5 fissures erupting at least some magma and significant releases of sulfur dioxide

, shelters have been set up for residents and Hawaii Volcanoes National Park has been closed

. At least 2 homes have been destroyed

by the eruption in Leilani Estates already. I talked to The Atlantic

about the eruption earlier today as well. The M6.9 earthquakes appears to have triggered another ash-rich explosion at Pu'u O'o as well:

The fissures appeared to have stopped emitting lava after a few hours. This does not mean the eruption is over as more magma could be moving through the tube system under Kilauea's East Rift. Usually, the new eruptions follow a sequence of inflation and earthquakes, then fumes, then fissures forming. The lava eruption so far has been much less dramatic than the 2011 Kamoamoa fissure eruption

, but this could change. Earlier in the day, a magnitude 5 earthquake hit the East Rift zone, no doubt related to the intrusion happening on the rift. The result of that earthquake was an ashy plume from Pu'u O'o and after a later overflight of the crater, a deep hole where there was the crater floor and lava lake. This suggests that much of the lava that was supporting and supplying the eruption at Pu'u O'o may have drained as the Leilani Estates eruption was beginning. The question is whether the lava erupting far downslope is from Pu'u O'o (22 kilometers away) or from the summit (over 40 kilometers away). This really betrays just how big Kilauea is!

The collapsed floor of the Pu'u O'o crater after the M5 earthquake on May 3, 2018. USGS/HVO. The summit lava lake has definitely seen a drop

in the lake level, but nothing compared to the drop that occurred prior to the 2011 Kamoamoa fissure eruption. This will be watched closely to see if it continues to drop, suggesting magma moving in the tube system under the East Rift to feed a potential prolonged Leilani Estates eruption. I'll update this post as I have more information or events change.