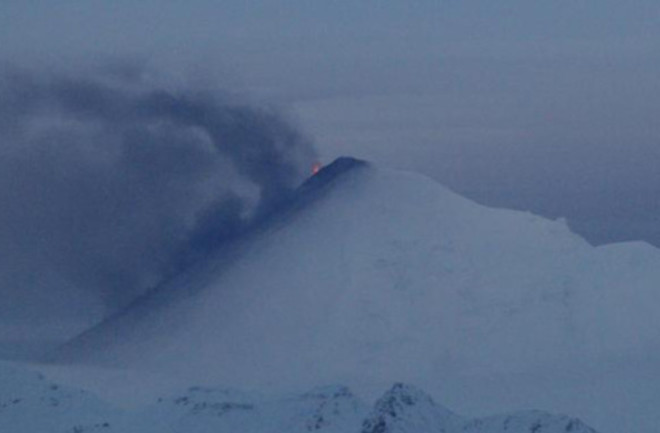 The lava fountain at Pavlof during the eruption that started on November 12, 2014. Image: Carol Damberg / AVO. It has been a fairly quiet year for the volcanoes of Alaska. A few have rumbled but none have really had an eruption that caught everyone's attention like recent events at Veniaminof, Redoubt or Kasatochi. It appears that Pavlof might be trying to make up for some of that lost time as a new eruption has started at the volcano. The Alaska Volcano Observatory is reporting ash reaching ~2.7 km (9,000 feet) and images of the volcano taken from Cold Bay clearly show a lava fountain (see above) coming from the most recently active vent. Seismicity remains high at the volcano, suggesting that the eruption isn't likely to stop immediately and visibility is touch and go with low cloud cover. This is the second bout of lava fountaining that Pavlof has experienced this year. The first set of eruptions started in late May and went on until June with a lava flow that snaked down the side of the volcano almost 5 km (3 miles). However, by the end of July, the alert status at Pavlof was lowered to Green after seismicity ended. This new activity isn't abnormal for Pavlof, where the volcano takes breaks that might last a few months between new eruptions. Pavlof rejoins Shishaldin and Cleveland as the only Aleutian volcanoes on elevated alert status right now. There is no AVO webcam pointed at Pavlof, but you can check out the FAA weathercam located in Cold Bay to catch a glimpse.