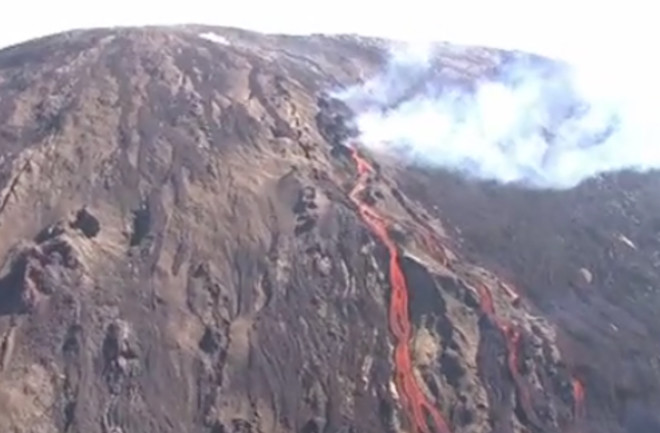 LIinfo.re (video capture). I guess the competition in Group E just got more interesting. Piton de la Fournaise, located on Reunion Island in the Indian Ocean, had its first eruption (see above) since 2010. The eruption is behaving as most do at the shield volcano over the Reunion hotspot, with fast moving lava flows over the barren terrain. You can see some video of the eruption, showing the fissure and the branching lava flows heading down slope (see below). The lavas at Piton de la Fournaise are lower viscosity than you find at similar eruptions at another hotspot volcano, Kilauea. That's because the lava is more alkaline, where the addition of Na, K and Ca into the magma keeps it from forming chains of silica as easily. This means the viscosity remains lower for longer and producing those fast moving pahoehoe flows. Luckily this eruption is in a very remote part of the volcano, so there is little-to-no threat from the flows, unlike the eruption in 2007.

LIinfo.re (video capture) The eruption itself started in the early morning hours on June 21 from the southeastern side of the main summit crater. There had been 10 days of precursory signs that an eruption was in the works, with higher gas emissions and seismicity, along with a red glow in the area very recently. Unfortunately this current eruption is not occurring in view of any of the webcams pointed at the volcano.