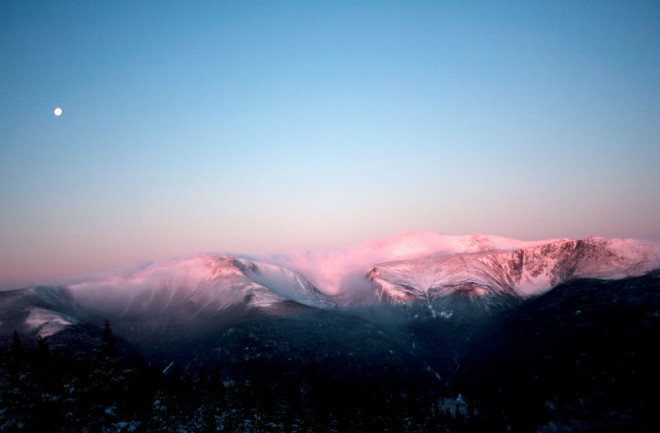 Mt. Washington in the White Mountains of New HampshireJose Azel/Getty Images Last week I ran across a fairly provocatively-titled article on Gizmodo that claimed that New Hampshire might have a volcanic future. At first glance, you might think that is click-bait nonsense, but that is far from it. At some point in the geologic future---maybe millions to hundreds of millions of years from now---volcanoes will erupt across eastern North America. It is likely inevitable. However, until recently, we haven't had any geologic evidence of what might (and I emphasize might) be the first sparks that could someday lead to a newly volcanic New England. Now, New Hampshire and all of the northeastern United States has been a very volcanically quiet place for a long time---and by that, I mean we likely haven't had a whiff of volcanism in over 100 million years (contrary to some apocryphal reports of volcanoes in the 1800s). That's because all of New England is on what is called a "passive margin" of the North American continent. There is really nothing geologically exciting in terms of volcanoes or earthquakes along the whole east coast. Compare that to the "active margin" on the west coast, where you have the Cascade volcanoes, faults, earthquakes---the whole lot. That's because on the west coast, North America is directly interacting with other tectonic plates, namely the Pacific, Gorda, and Juan de Fuca plates. These plates are either grinding against North America to make the San Andreas fault zone or plunging underneath the continent to create the Cascadia subduction zone. Over on the east coast, you need to travel all the way to the middle of the Atlantic Ocean before you find another tectonic plate. That boundary between North America and Europe is a spreading ridge, where a new plate is created, moving the two continents further apart. The boundary is thousands of miles from the eastern seaboard of the continent, so it really plays no role in geologic activity along the passive eastern margin. However, this will not always be the case. Although the Atlantic Ocean is geologically young and still actively spreading, it will start to close again at some point. Our current continental configuration on Earth is one where the continental plates are all fairly spread apart, but that is only one part of a tectonic cycle---the Wilson Cycle---in which massive supercontinents break into dispersed continents and assemble again. So, although North and South America are moving away from Europe and Africa today, at some point they will start to converge again.

Why might that happen? Well, mostly likely it would be the initiation of a new subduction zone on one or both sides of the Atlantic Ocean. Remember, in a subduction zone, the dense oceanic plate (the floor of the Atlantic) will sink down underneath the more buoyant continent. Then we'll start seeing the earthquakes and volcanoes associated with subduction. Of course, one of the biggest questions in tectonics today is what causes subduction to start. We've never seen it happen---the process likely takes millions of years. Exactly why a perfectly happy stable continental margin (like we have on the east coast of North America) suddenly starts to see the oceanic plate founder and subduction begin is the realm of arm-waving and speculation. A theory on one end of the spectrum is that the oceanic plate---which is already more dense than the continental plate---will become so cold and dense that it starts to sink back into the mantle, detaching itself from the continent along weak points. The other end might be that the edge of the continent becomes hotter and thinner and eventually breaks off from the oceanic slab. There have even been some studies that propose mechanisms to support a purely tectonic stress origin to subduction and suggest that we're seeing very early signs of new subduction along the European margin (though those conclusions are highly controversial). But let's head back to New Hampshire. A new study in Geophysical Research Letters by Menke and others examined something that geologists have noticed under New England for a few decades. A zone in the mantle---400 kilometers across and lies 200 kilometers beneath our feet---is anomalously warm. It might be as much as 700°C hotter than much of the mantle surrounding it. Early speculation was that this area, known as the North Appalachian Anomaly, was the remnant of a mantle plume (like the hotspot under Hawaii) that North America passed over 130-100 million years ago. Menke and others used seismic waves generated by large earthquakes to examine and model the geometry of the North Appalachian Anomaly. They found that it really doesn't line up well with the path of the hotspot; the anomaly is much more confined and circular in shape than originally thought. This evidence suggested to to them that the anomaly is not a remnant but its own, new(ish) feature of hot mantle. Oddly, springs in New England have elevated helium-3, an isotope of helium associated with places with active magmatism. Menke and others propose that the coincidence of the North Appalachian Anomaly and this elevated helium-3 support a hypothesis that the anomaly is really a place where the mantle under New England is convecting upwards and melting, creating this region of warmer material. Remember, the mantle is not solid or molten, but rather a plastic zone that can move and melt. Possibly, the movement of North America has created eddies in the mantle, like a boat passing through the sea. So under New England (and some others parts of eastern North America), the mantle is rising and making things hotter under the continent. Now, the big speculative jump here is from this evidence to the idea that maybe new volcanism will start in New England. Menke and others' main conclusion is that the North Appalachian Anomaly is not the old remnant of a hotspot. In fact, they suggest that things under that part of North America may never get hot enough to create much new molten rock. "An intriguing alternate possibility," they write, "is that the NAA is an incipient feature that will lead to a new magmatic event in a few million years." A volcanic New Hampshire is well down the list of possibilities. But it's not outside the realm of possibility. However, all this talk of warmer bits of mantle and eddies along the eastern margin of North America got me wondering: Maybe these eddies are what can lead to new subduction? Heat can thermally eat away at the edge of a continent until you cause that break between the continent and ocean. An even more distant possibility is that this is a common process that eventually, millions of years or more down the road, creates a New England volcanic arc, starting the Atlantic Ocean toward its demise. This is some of the most exciting stuff in geosciences today: We can use these bits of pure research to better understand how the planet will evolve in the near and far future---and whether some day we might be talking about the great volcanoes of Concord and Nashua.